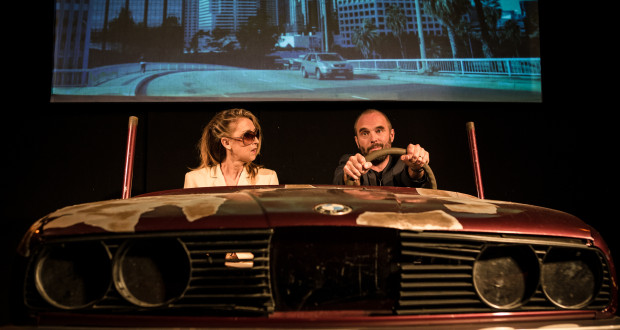 Pros: Remarkable depth of characters sketched in a series of brief vignettes. Excellent design. Cons: Theatre like boiling cauldron; prepare to be steamed. Niel LaBute's love of language and the anxieties of using it is enormously appealing. In each of the seven short plays that make up Autobahn the characters question whether they're using words correctly, whether they've captured exactly what they mean, whether they've cheapened a term by overusing it. On one level Autobahn is an exploration of all the ways people can fail to communicate with each other, verbally and non-verbally. The text is so rich that&hellip;

A challenging and ultimately rewarding journey through the nether regions of the American psyche as seen from the front seat of a car.

Niel LaBute’s love of language and the anxieties of using it is enormously appealing. In each of the seven short plays that make up Autobahn the characters question whether they’re using words correctly, whether they’ve captured exactly what they mean, whether they’ve cheapened a term by overusing it. On one level Autobahn is an exploration of all the ways people can fail to communicate with each other, verbally and non-verbally. The text is so rich that it gives the actors plenty of room to explore, and Savio(u)r do a great job bringing the series of short plays to life.

LaBute has a way of slowly unfolding the relationships between characters which causes the audience to continually reassess their assumptions. Often the truth becomes increasingly disturbing as the scene goes on, with an absurd reality of dark impulses revealed beneath the small mannerisms and conversational facade of normal social convention.

All of the action takes place in designer Neil Gordon’s fantastic set piece, the front of a car. Director Tim Sullivan gives each act energy and a sense of movement even in the very restricted space. The play works well in the scale of the King’s Head, as even with limited room to manoeuvre the actors fill the space. Paul O’Shaughnessy’s lighting and other media design supports the scenes without overwhelming them, lending atmosphere with subtle effectiveness.

Opening with funny, Zoe Swenson-Graham and Sharon Maughan portray a daughter and mother driving back from a rehab centre following a course of treatment. Swenson-Graham has the only speaking role in this piece but Maughan certainly holds her own in bringing the mother to life.

Swenson-Graham remains for the second act, bench seat, with Tom Slatter. As with all the plays, the situation is sparse (a couple has driven to a romantic overlook) but there is a deep exploration of America’s fraught and under-acknowledged issues of class. Swenson-Graham delivers increasingly disturbing revelations about her character’s darker impulses and past actions with a chilling playfulness. Slatter’s character, initially condescending, becomes increasingly sympathetic as we realise with him the severity of his situation.

Henry Everett’s explosive, staccato monologue through all apologies is a celebration of the power of words: the power of language in itself but also who owns the words, who has influence over definitions. It becomes a reflection on who has the power to define what is considered appropriate socially as well as linguistically. Swenson-Graham gets a silently reflective role this time. It is impossible to pinpoint which part of the United States Everett’s accent is supposed to be from in this and in his other scenes, as it veers wildly from Bugs Bunny-ish Flatbush nasal tones to the Norwegian-tinged inflections of Minnesota. But I always say that it’s cruel to send the American reviewer to the American play, as probably nobody else noticed this elocutionary whiplash.

Slatter and Everett in long division explore the deceptive righteousness that people employ when trying to manipulate others for their own ends. This vignette has the least at stake for the characters but it makes a change to enjoy the comedy of the scene without the impending threat of distressing revelations.

The title act, autobahn, pairs Maughan and Everett to wrap the themes of the prior acts up in one gloriously sinister package of middle-class values thinly covering baser impulses. Like the earlier pieces, autobahn swings between the banal and the monstrous, with little references to every day normalcy interspersed between shocking revelations about money, sex, responsibility, and community standing. Ultimately, as in all of the acts, this is about power: the ways in which it corrupts those who hold it, and how the characters rationalise their choices or cover them over.

While the dark themes of LaBute’s work may not appeal to some, for those willing to take up the challenge it’s a rewarding journey.

Previous: The Comedy of Errors, The Museum of The Order of St John – Review
Next: White Rabbit, Red Rabbit, Chelsea Theatre – Review