Home » Features and Interviews » A Communal Turn of Events

A Communal Turn of Events

Community is everything, and is everywhere. But how can a play touring innumerable different communities relate to each and every one of them? Julie Griffiths discovers how The Events, a now-touring production using a different local choir at each new venue, does exactly that.

The first time I heard about The Events was not because it had won Guardian play of the year 2013. It wasn’t that it had been awarded a Scotsman Fringe First, or that it had been written by Scotland’s foremost playwright David Greig. Despite its various accolades, the first time I heard of The Events was because the local choir I sing in was invited to sing in a performance at Brighton Dome which was being produced by the Actors Touring Company.  We were given some songs to learn, a brief outline of the story and asked to turn up for one rehearsal before appearing on stage the next night.

The Events is a play about surviving. It is set in the aftermath of a mass killing in a small community, an artistic response to the 2011 tragedy at Utoya in Norway. David Greig and director Ramin Gray use the play to question whether there are limits to human empathy and whether it can become destructive in itself. 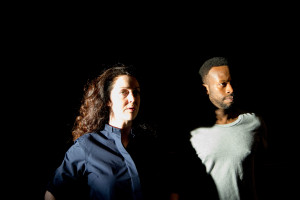 Derbhle Crotty and Clifford Samuel as Claire and The Boy. Photo by David Levine

The story is carried by Claire, a young priest, who is trying to come to terms with the mass shooting of her multicultural choir. She wants to understand the killer’s motivation in order to forgive him, and her efforts to understand drive her to the edge.  It is a play about grief, anger and revenge but, at the heart of it, is about community and what binds us together.

The idea of having a different local choir for every performance came to David Greig and Ramin Gray during a trip to Norway. Greig points out that the choir actually came first: “We saw a choir when we were in Norway and it seemed like such a perfect image of the best of being human. In the play what happens to them becomes the motor for the story.”

Music, too, is key to the play’s sentiment. Grieg said: “Words, music and dance  combining to tell a story are the most primal means by which humans understand each other. I can barely imagine doing a play which didn’t have music central to its being.”

The inclusion of local choirs from the play’s venues tethers the play’s central theme to its actual surrounding communities Ramin Gray says “Every act of theatre revolves around a transaction between two communities: the performers onstage, and the improvised community that constitute what we call an audience”.  In The Events a local community choir is placed on a tiered platform at the back of the stage acting as a mirror of the audience.  The choir, like the audience, are experiencing the play for the first time, so the audience is watching the experience the choir are having.

Grieg says “I wanted the audience to watch the choir watching and experiencing the play – part of the play is the experience of watching the choir be affected. However, it was a risk for me, because if I got the play wrong then the choir would be bored. Or they might hate it. Or be offended. All of those things seemed possible. Especially when I thought about the possibility of the play being performed in particular places – like Norway – or perhaps where choirs have connections to tragedies.”

Every act of theatre revolves around a transaction between two communities: the performers onstage, and the improvised community that constitute what we call an audience

Removed from the average theatre set-up, with pre-rehearsed actors on stage who’ve repeated their lines until they’re dry in their mouths, the presence of community members on stage steers the audience away from the idea that everything’s fine because it’s ‘only a play’. Grieg says: “It’s quite a distancing effect to have real people, non actors, on stage reading from scripts. I think by distancing you from ‘pretend’ it forces you to imagine. That imagining is more powerful than being spoon fed. The audience have to imagine harder.”

Associate Director Polina Kalinina and Musical Director Magnus Gilljam prepare each choir for the play by giving them an understanding of its background. Describing her experience of working with over 80 different choirs (about 2000 people), Polinia says: “I hold a very distinct memory of each choir’s identity. I remember the trouble makers, the ones who cried during the show, the soaring descants, the opening songs which involved rigorous dancing, the few that had to run out to the toilet during the show…but the experience has been so fantastic because I have a lot of respect, admiration and quite a lot of love for all of those people individually and collectively. The show wouldn’t be the same without them.”

When the root of the piece is the importance of accepting each other regardless of ‘tribe’ this sense of togetherness that’s created in the mirroring of the audience and the choir is priceless. It wouldn’t be the same if we toured with the same choir as there would be no sense of recognition, camaraderie or support. The choir would then simply be another actor on the stage, whereas now they are a reflection of the very community they are singing for.

I think by distancing you from ‘pretend’ it forces you to imagine. That imagining is more powerful than being spoon fed.

Having an on-stage choir who have never seen the play before seems like it should be a recipe for disaster. However, even when things do go slightly wrong, Hege Hermansen, the production’s choir coordinator in Norway, says this just contributes to the authenticity and community feel of The Events:

“We had one man who asked another question than the one in the script because he didn’t have his glasses on, we’ve had phones ringing IN the choir, people overplaying dramatically, everything… but it has been wonderful. Every choir has its own group energy and it just warms everybody.”

As it continues on its UK tour, The Events is set to continue drawing communities into a unique theatrical experience in which they are both the performers and the audience. Musing on the play’s power in the mind of the individual, David Grieg hopes that his work has had a transforming effect on those the play has touched: “Brecht said once, ‘all theatre is transformative but the people it transforms the most are those who make it.’ So I hope 2000 people have found they have all experienced something transformative.”

Click here to get more information about the currently touring production of The Events.