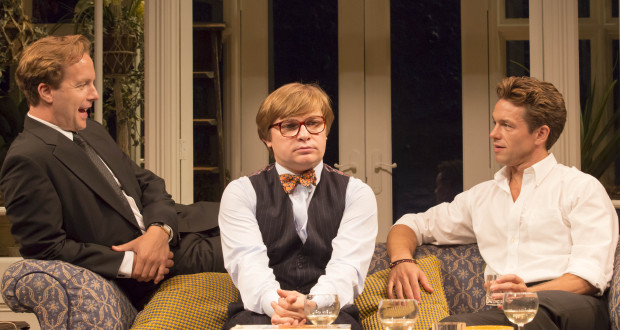 Pros: The cast are fantastic; it’s a rare treat to see a play with such a consistently strong cast who work so well together.

Cons: If I was being very picky, there were a couple of indulgent and lingering moments that went on slightly longer than necessary.
﻿My Night With Reg, Donmar Warehouse – Review

Pros: The cast are fantastic; it’s a rare treat to see a play with such a consistently strong cast who work so well together.   Cons: If I was being very picky, there were a couple of indulgent and lingering moments that went on slightly longer than necessary. Tonight was my first visit to the Donmar Warehouse and I hadn't realised how intimate a venue it is. Being in the stalls, I felt as though I was literally in the flat the play is based in, and I felt like the cast became my own acquaintances throughout the play.&hellip;

The play is brilliantly written and the subtleties in the script ensure that the 1hr45min-long play (with no interval) keeps the audience engaged and on their toes.

Tonight was my first visit to the Donmar Warehouse and I hadn’t realised how intimate a venue it is. Being in the stalls, I felt as though I was literally in the flat the play is based in, and I felt like the cast became my own acquaintances throughout the play. This was a testament to the theatre, but also a testament to the quality of the acting.

My Night With Reg, by Kevin Eloyt, is a comedy underlined with heart-breaking realities. The intertwined lives of these six men on stage who are acquaintances, friends and lovers reveal themselves throughout the play. Reg, who is never on stage, is a looming presence even after his death. His promiscuity is slowly revealed through various confessions and discoveries. The underlying presence of AIDS (which is never mentioned by name) just makes the consequences of this even more disastrous. Programme notes by Alan Hollinghurst comment on how Eloyt ‘trusts his audience to interpret and connect’. I think that this is why the play is so rewarding and heart-breaking to watch.

I have to be so bold as to say that the cast were almost flawless. Every character had their quirks and subtle mannerisms; right down to discreet eye movements that told more than any amount of words could. Guy, played by Jonathan Broadbent, and his brilliant facial expressions showed the pain of unrequited love perfectly. Eric, (Lewis Reeves) as the young handyman who eventually becomes more involved with the other characters, shows his innocence and optimism with style. Bernie (Richard Cant) was my personal favourite. He comes across as the naïve partner to the somewhat callous Benny. Bernie’s depicted as something of a joke and his boring talks about conservatories, which left his friends despairing, were very funny.

The play is set in in Guy’s flat, with a view into his living room and into the conservatory. By keeping the set the same it may have been difficult to tell that so much time passed between scenes but Elyot’s fantastic script ensures that we know what is going on. The use of music was also great in this show, setting the era of the play and a key feature in the play itself. The play starts with The Police’s Every Breath She Takes at full volume, this suddenly drops and we can still hear a tinny rendition bleeding from Eric’s headphones. Bowie’s Starman also plays a part, with two of the characters singing it together at two very different points in the play. But the main piece of music, a classical piece I was not familiar with, reveals just how unfaithful and promiscuous Reg was. Eric plays the music to Guy and describes how a nameless lover had played it to him, as Guy and the audience realise that the mystery man was in fact Reg.

In my humble opinion all cast and creative team should be proud to be part of such a fantastic production, a tribute to the late Eloyt who passed away just three days before rehearsals started.

TRANSFER NEWS: My Night With Reg is transferring to the Apollo Theatre in January 2015, and is booking until 11 April 2015. For more information, visit: http://apollo.londontheatres.co.uk/. 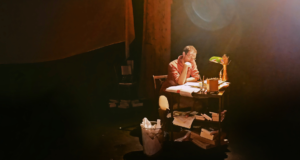