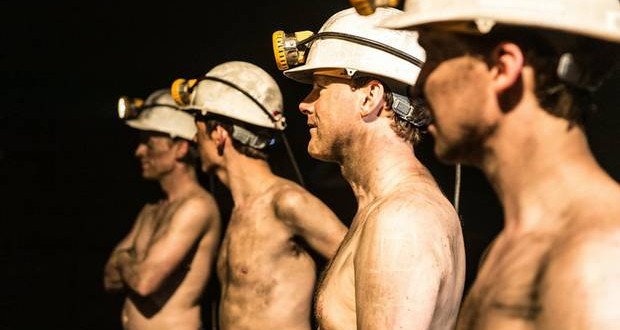 Cons: The long duration makes it tricky to keep the pace throughout.
Wonderland, Hampstead Theatre – Review

Pros: A moving script, relatable characters and an impressive set design. Cons: The long duration makes it tricky to keep the pace throughout. Set during the political struggles of 1984, Wonderland follows the progression of the British miners’ strike from the perspectives of both the miners and the politicians of the time. The most instantly striking element of this production has to be the set. Playing in the round, the actors move within a three dimensional world of steel and coal dust. A cage lift is positioned centre stage, taking the characters up to overhead rafters or down into a sunken&hellip;

An entertaining, moving and memorable piece.

Set during the political struggles of 1984, Wonderland follows the progression of the British miners’ strike from the perspectives of both the miners and the politicians of the time.

The most instantly striking element of this production has to be the set. Playing in the round, the actors move within a three dimensional world of steel and coal dust. A cage lift is positioned centre stage, taking the characters up to overhead rafters or down into a sunken ‘pit’ below the stage level. Before the play even begins, these surroundings establish a world of cold, hard industry.

A large part of the first act takes place underground, in the coal mines, during which the production design really outdoes itself. At times the darkness of the auditorium is broken only by the light from the miners’head-torches, whilst smoke effects add to the industrial atmosphere. Sound is also used to great effect throughout the play and most memorably during the underground sequences. The miners sing at different points during the story, either unaccompanied or with a single banjo, played live on stage. As a device, these sections are extremely expressive. The combination of the voices and rhythm creates a sense of camaraderie, physical labour and masculinity in a succinct package, as well as providing a toe-tapping method of linking between scenes. A few carefully placed sound effects have a huge impact and the echoing surround-sound really helps to draw the audience into the world of the pit.

Tackling difficult subject matter around class struggles, politics and personal values, the script contains a delicate balance of grit and humour. Some moments in the dialogue are really very funny, whilst others are poignant and moving. Writer Beth Steel also accomplishes the difficult task of representing both the mining population and the politicians of the day. Within both groups, a range of characters are present, offering a variety of different perspectives as the situation unravels. Ultimately though, it is the miners who are represented in the most personal light. From the wide-eyed Jimmy and Malcom (Ben Ryan-Davies and David Moorst) taking their first journey underground, to their leader, the ‘Colonel’(Paul Brennen), Steel’s dialogue allows the audience to experience the individual impact of that the strike has on each person.

With such an emotive script, the cast has a lot to work with and this team absolutely thrives with the material. The actors deliver a broad range of intense emotions in addition to their singing, scene changes and hitting their marks in the choreographed sequences. Not only do they do all this as one perfectly coordinated unit, they also manage to keep the audience emotionally engaged throughout. From a technical perspective, the set design means that dialogue is sometimes spoken out of view from some seats, however the actors make up for this with great projection and clear diction.

At two hours and thirty-five minutes, this is quite a long production and there were moments in the second act, where I felt the pace could have been quickened a little to keep the story moving. Having said this, the play is of course based on real, historical events so there is a relevancy to everything that is addressed during its course. I also felt that the poignancy of the final scenes made for a very engaging conclusion to the journey.

Mixing rousing songs, laughter and tears, Wonderland is a must see. Those with an interest in the history of mining or British politics will appreciate the context but it is also a visually striking, entertaining and immersive experience for anyone who simply loves theatre.