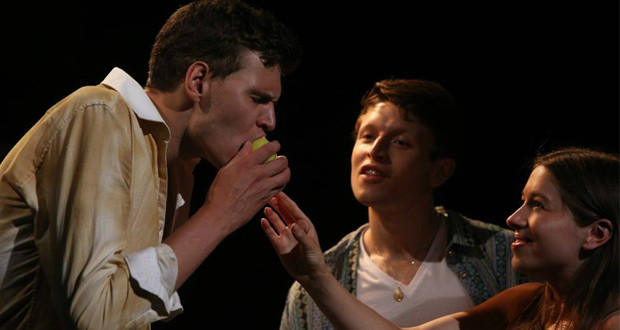 Pros: Hilarious, witty soundtrack combined with an impressive cast of voices will leave you hunched over in laughter.

Cons: It may have just been first night nerves but sometimes the odd lyric was sung too quietly to hear.
Up From Paradise, New Wimbledon Studio Theatre – Review

Pros: Hilarious, witty soundtrack combined with an impressive cast of voices will leave you hunched over in laughter. Cons: It may have just been first night nerves but sometimes the odd lyric was sung too quietly to hear. Battling through the heat of the evening summer sun, I admit I was apprehensive about going to watch the London premiere of Arthur Miller's first and only musical, Up From Paradise. A comedy musical adaptation of the Book of Genesis doesn't sound like it'd work on paper, and indeed when it originally opened as straight-up comedy play The Creation of the&hellip;

Successful premiere of a rib-tickling comedy musical from one of America's greatest playwrights.

Battling through the heat of the evening summer sun, I admit I was apprehensive about going to watch the London premiere of Arthur Miller’s first and only musical, Up From Paradise. A comedy musical adaptation of the Book of Genesis doesn’t sound like it’d work on paper, and indeed when it originally opened as straight-up comedy play The Creation of the World and Other Business, it flopped. But its musical successor has enjoyed enormous off-Broadway success in the States and as soon as I heard the first upbeat notes sung my qualms were put to rest.

PK Productions has clearly put its all into this sumptuously satirical showcase of Miller’s famous wit. Up From Paradise follows a slightly narcissistic yet all-loving God on his quest to create the perfect human being… which at first seems to be the innocent and eager to please Adam. However, loneliness soon takes over and Adam requests a human companion, signifying the arrival of Eve. At first able to tame their curiosity, it doesn’t take long for Lucifer to tempt the couple into taking a bite of Eden’s forbidden fruit, leading to their extrication from Paradise and the start of their trials on earth.

New Wimbledon Studio’s minimalist, intimate setting – containing only a desk and tree – lends itself well as a contrast to the bright personalities of its eager cast. Adopting heavy New York accents and over the top expressions, the company fully embrace the fun, light-hearted nature of Stanley Silverman’s lively score. Accompanied by a live piano, the standout soundtrack combines elements of gospel, barbershop and baroque music to witty lyrics that explore life’s bigger questions, including morality and the meaning of existence.

The entire cast boasted strong voices but I was particularly blown away by Eve’s (Susanna Squires) during her powerful performance of gospel-influenced solo All Love – it was very impressive to hear such a room-filling voice burst out of such a small person! By the end of the night it was Lucifer (Alex Wingfield) who stood out in my mind the most. His act was by far the most convincing, with his seductively sly asides and genuine frustration at Adam and Eve’s blind acceptance of their way of life. His devious attempts to turn Cain against his brother are especially spine-chilling and Wingfield does a fantastic job of getting the audience to sway towards Lucifer’s side at times.

The cast’s comic timing was also spot-on – visual cues were an essential part of the play, with God’s adoring angels often popping their heads out unexpectedly from behind the curtains to join the chorus. The dialogue itself is peppered with in-jokes and nods towards the fourth wall, such as Cain’s petulant remark to Eve that “there are four people in this world mother.”

New Wimbledon Studio Theatre itself is a charming intimate venue tucked just behind the main theatre. A small team of friendly staff and the bar located just behind the stage round-off the experience, with the close setting and blacked-out stage allowing audiences to become particularly lost in the action.

We were also lucky enough to have the play’s original composer, Stanley Silverman, make a guest appearance and give a short Q&A about the origins of the musical and fascinating anecdotes about his friendship with Miller. I sincerely hope that this premiere of Up From Paradise Is not the last we’ll see of Arthur Miller’s hilarious and only musical offering.

Previous: Henry V, The Rose Theatre – Review
Next: Son of Man, Museum of the Order of Saint John – Review