Home » Features and Interviews » Son Of Man: behind the scenes – Sponsored 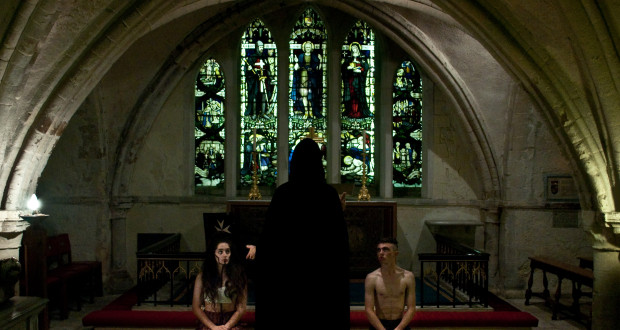 Son Of Man: behind the scenes – Sponsored

Author: Everything Theatre in Features and Interviews 10 July 2014 0 552 Views

A new production of Son of Man opens in London next week. Producers Cut String Theatre tell us a bit more about their latest offering.

One thing that we wish to be clear about is that Son Of Man is neither a religious or an atheistic play, nor a polemical against, or a celebration of Christianity. The plot is based around the original framework of the Passion Narrative, which is used as a springboard into a discussion of the very issues that are explained away by Christ’s sacrifice on the Cross – those of absolute morality (as it appears in the institutions of Abrahamic religion and frameworks of rule throughout the world’s history), the issue of what ‘sin’ is, and that of the fundamental gulf between Jesus the man and Christ the Son. In this way, our interpretation of the Passion Narrative is radically different from other, more traditional productions.

Son Of Man is neither a religious or an atheistic play, nor a polemical against, or a celebration of Christianity

The show itself is based on the Mystery Plays of the Middle Ages, which traditionally were staged re-enactments of stories from the Bible. As this essentially allowed us the whole breadth of Christian history to play with – stretching from the Creation of the World to Judgement Day – we decided not to limit ourselves to one particular play, or set of plays. Indeed, Son Of Man was actually created by splicing together individual lines from a total of forty-eight different Mystery Plays. It was a painstaking process, and whilst it may not seem the most efficient way of working, it meant that by the time the play was finished we were left with what was, to all intents and purposes, an entirely original script, but one that was still in authentic Middle English.

As such, The Lucifer of our play has yet to Fall. The two protagonists echo Adam and Eve in the Garden, yet they live in our harsh, post-lapsarian world. God rules by the covenant of the Old Testament, and not the New. We did this in order to cut to the heart of these questions: what if Jesus didn’t redeem? What happens if we remove the divinity of Jesus’ message? Where did his message come from? Is it worth anything? Will man always sin? What does sinning mean? Does God have a right to judge?

However, whilst all this may suggest the contrary, our initial interest in the Passion Narrative actually came not from any underlying theological or ideological bent, but rather from a desire to move further back towards the roots of English drama, and towards the roots of the art that we practice. Having started our career with productions of Shakespearean texts, we saw the Mystery Plays to be the next step in that journey, having been one of the earliest theatrical forms to develop in medieval Europe. However, in spite of both the huge influence of these plays, and the earthy beauty of the language, in the modern theatrical world they go almost entirely overlooked, often in favour of later Elizabethan and Jacobean scripts. Indeed, reminding people of this somewhat forgotten era of theatre certainly influenced us in the early stages of development. Although ther

e have been some modern revivals, a lot of the material we used to create the play will not have been performed for hundreds of years.

In light of all this, the Norman Crypt that we have been able to secure as our venue (thanks to the people at The Museum of the Order of St John) seems highly appropriate. Built almost one thousand years ago, its incredible atmosphere stems largely from its amazing vaulted ceiling, the stained glass window that dominates the back wall, and its two altars – one of which was moved there, having originally come from a little town called Bethlehem. Not only is this location from the same era as much of the material that makes up the play, but it is of the exact Christian tradition that we are attempting to engage with. We could not have asked for a more perfect space.