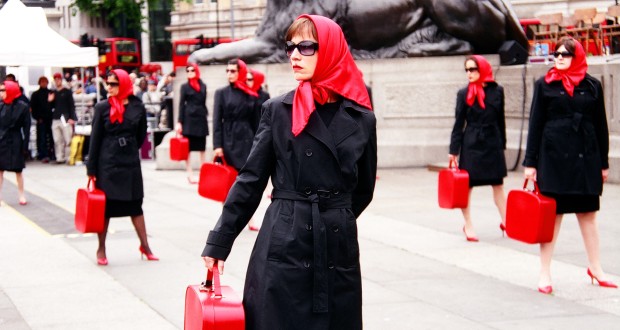 Cons:  Often not engaging enough. A bit too clever for its own good.
Red Ladies, Southbank Centre – Review

Pros: Bizarre, fantastical, original and witty… but mind boggling. Cons:  Often not engaging enough. A bit too clever for its own good.   To put it plainly; my theatre going buddy and I had absolutely no idea what the heck was going on during this show. There were so many varied ideas, some clear and engaging, others not; and it was therefore easy to lose focus or be distracted. The piece explored the roles of women throughout the ages. It was a fascinating, hap-hazard collection of scenes in four movements, the titles of which helped to make the story clear&hellip;

The potential is there, but it needs more polish and cohesion.

To put it plainly; my theatre going buddy and I had absolutely no idea what the heck was going on during this show. There were so many varied ideas, some clear and engaging, others not; and it was therefore easy to lose focus or be distracted. The piece explored the roles of women throughout the ages. It was a fascinating, hap-hazard collection of scenes in four movements, the titles of which helped to make the story clear for the audience; Flocking, Discord in the chorus, More lamentable events, In which an inspirational recipe effects a demonstration of decisive action.

In the latter movement a woman recited a recipe to her fellow cast of women along to a sexy jazz number. It was funny, though-provoking and an example of theatre at its best. The entrance scene, on the other hand, which involved various members of the cast guiding us through backstage, across the stage and finally to our seats, was clever. But what purpose did it serve? I’m not so sure.

There was so much that probably worked on paper and in rehearsal discussions which fell flat on stage. For example, a book reading scene that dragged on for far too long. The cast also seemed needlessly large. I’m the kind of person who thinks theatre making should be open to all and I really applaud the director Suzy Willson for assembling such an open and ambitious cast. But to what extent did this serve the story or needs of the work? I admired the scope and vastness of the production, but I couldn’t help feeling that perhaps the messages and ideas dished out to the audience would have come across more clearly with a smaller cast and in a smaller space.

I do think the production values were superb. Paul Clark’s wonderful score provided the intimacy that was lacking from other aspects of this production. Hansjorg Schmidr’s lighting design served the needs of the piece well; simple and effective.

There was a wonderful scene involving a very good female drummer at the end who looked like she just had stepped off the Pyramid Stage at Glastonbury; her playing was hard, visceral, loud and masculine: a change from everything that had preceded it. It concluded what was a challenging spectacle nicely.

I admire the commitment and dedication of everyone involved. Theatre making is just that: Making! It’s all about the process, which is why I really appreciate being given the opportunity to review shows like these. It reminds me that there are contemporary theatre makers out there who are brave and willing to put their creative reputations on the line. Sometimes things come together and sometimes they don’t. What’s important here is the variety of styles the female performers were able to utilise to explore the various themes on display; servitude, mundaneness, boredom and obedience, just to name a few.

The story of women and their struggle for equality is a story that can never be forgotten and can never cease to be told; no matter the guise in which it is presented. Women have not achieved equality, despite what many may think. However, for all the bravery and chutzpah on display, this show was not a perfect work of art. I don’t feel it’s quite there yet. I hope it does come together one day because it just may knock your socks off.

Devised By: Clod Ensemble
Directed by: Suzy Willson.
Running Until: The show has finished its run at the Southbank Centre.