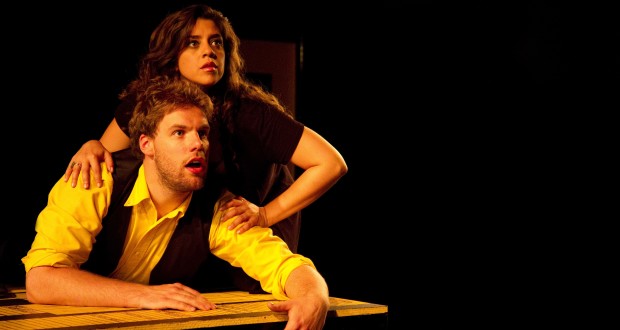 Pros: A well-oiled company having fun with Hollywood clichés.

Cons: Occasionally the actors seem to be enjoying themselves so much they forget they also have a story to tell.
Lights! Camera! Improvise!, Union Theatre – Review

Pros: A well-oiled company having fun with Hollywood clichés.   Cons: Occasionally the actors seem to be enjoying themselves so much they forget they also have a story to tell. I don’t know a lot of people who still buy DVDs, but last night at the charming Union Theatre I got acquainted with one: Oscar. Oscar owns the biggest DVD collection in the world. Not only does he have every single film that’s ever been made, he also owns every single one you could possibly imagine. And of course it’s up to the audience to decide which one of&hellip;

I don’t know a lot of people who still buy DVDs, but last night at the charming Union Theatre I got acquainted with one: Oscar. Oscar owns the biggest DVD collection in the world. Not only does he have every single film that’s ever been made, he also owns every single one you could possibly imagine. And of course it’s up to the audience to decide which one of these they want to see.

This is the premise of Mischief Theatre’s long-running show Lights! Camera! Improvise!, in which the cast improvise an entire film, aided by host Oscar. Some vocal warm up exercises are meant to get the audience in the mood for shouting out suggestions and lead to an early bout of hilarity when a couple in the front row discover they would both leave the other for Channing Tatum. Then it’s time for the decision-making: we have to come up with a genre, location, main character and title for the film. It’s quickly determined that it’s going to be a gangster movie set in a church, with a priest in the lead role. The title takes a bit longer: Machine Gun Preacher and Oh My God eventually lose out to the highly dramatic The Last Supper.

With all the preliminaries in place the cast members begin improvising their way through the story of Archie, a part-time gangster, part-time priest who trades in illegally imported alcohol with his business partner Father Miranda. The actors are well-attuned to each other: there’s none of the spotlight hogging you sometimes get in less-experienced companies. Of course there is the occasional fumbling about, especially in the fight scenes near the end, but that’s to be expected. After all, it’s tricky to tell when your colleague standing behind you is miming shooting you in the back of the head. And with what weapon exactly, because these actors were not going to limit themselves to just guns. Apart from some of these unconventional  additions to the gangster genre, like a cop armed with a crossbow, the cast also gleefully throws around plenty of Hollywood clichés. Especially the ‘terrible one-liner’ makes a frequent appearance and I personally look forward to hearing gems like ‘In the name of the Father, the Son and the where the hell have you been’ in The Expendables 4.

Making sure we stay on course between all the fun is left to Oscar, who has the power to steer the story by pausing, fast-forwarding and jumping to the DVD extras. It’s a tricky role that Henry Shields carries out with insight, although his work is at times made difficult by the actors who enjoy messing with him. Occasionally they do enjoy that a bit too much though; you can only repeat a joke so many times before it starts to get old. The pace is an issue as well: some scenes simply take too long, and in my opinion 75 minutes of improvising on one storyline is a bit much.

Lights! Camera! Improvise! is by no means a revolutionary concept. If you’re familiar with the improv genre,  chances are high you’ve seen shows like it before. What would be more challenging is finding a company of this quality. These actors have the psychical skills, timing, creativity and familiarity with one another to whip up a well-oiled show. Without sets or props, but with the simple yet effective backing of two musicians, they made The Last Supper a memorable evening at the theatre. If you decide to go I can’t guarantee that what you’ll see will be anything like this of course, but it’ll be something you’ve never seen before.