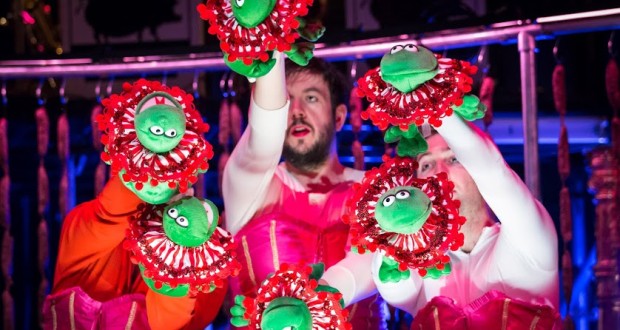 Pros: This dark comedy comes equipped with serious talent. Oh, and plenty of pigs. Cons: Occasionally hard to follow at times but the sheer craziness overcomes this. Although I’ve visited the Royal Opera House before, this was my first visit to the Linbury Studio theatre downstairs. It has its own spacious bar area and the auditorium is air-conditioned (bliss in our current hot spell). I really didn’t have any idea what to expect from this production. The basic story is that of Gloria, a beautiful blonde pig, but not the brightest sow in the pen. She falls in love&hellip;

This may be a stretch for traditional opera buffs but if you fancy something a little different and you’re in need of lightness and laughter, then this is the perfect evening for you.

Although I’ve visited the Royal Opera House before, this was my first visit to the Linbury Studio theatre downstairs. It has its own spacious bar area and the auditorium is air-conditioned (bliss in our current hot spell).

I really didn’t have any idea what to expect from this production. The basic story is that of Gloria, a beautiful blonde pig, but not the brightest sow in the pen. She falls in love with a butcher, foolishly mistaking his attentions for love, when actually the only thing on his mind is sausages. Her unlikely hero arrives in the form of Rodney the wild boar, who sweeps in to rescue his lady pig in the nick of time.

It’s a simple enough story, but as is so often the case, the success or failure lies in the telling of the tale. Here we are given a cabaret-style performance, complete with an orchestra (Chroma) on a mezzanine level above the main stage. The performers arrive on stage as various sausages emerging from a sausage-making machine. No common old Cumberland bangers here though; instead we have a cocktail sausage, a chorizo, a smoked sausage, a vegetarian sausage and a Boudin Blanc. So it’s more of your modern artisanal sausage story. It is the Royal Opera House after all.

We are introduced to the gorgeous Gloria (soprano Gillian Keith) who is fabulously ditsy and vain in her blonde curls and fishnets. Bullied by the others pigs, she escapes and finds herself at a mootel with a couple of cows who are obviously big fans of the Blues Brothers. We also have a glove-puppet frog chorus, two dancing Hollywood hotdogs, some frog and pig lovemaking (no, honestly) and a funny scene of inflating pigs. Finally, there’s Rodney the wild boar, played and sung superbly by bass Sion Goronwy looking like a sad, shy wookie. This is all entwined with touches of burlesque and Berlin-style dark cabaret humour.

With a total cast of five performers, each playing a variety of roles, they all proved versatile and effective. The physical comedy was superb – especially the initial sausage entrance and a great honey-basting scene.

At times, voices were a little unclear so the storyline was a little vague in parts, but this was helped along by the ‘scenes’ being announced with storyboards at the side of the stage. The performance runs just shy of ninety minutes with no interval, and it’s packed with non-stop action and mayhem.

If you like your opera traditional then this could be a challenge for you. Vocal operatic talent is presented with tomfoolery rather than gravitas. I have to say that for this reason it messed with my head a little, but I came away at the end with a smile on my face and my operatic boundaries tested.

Working at discovering the meaning of life. Debbie has a chequered past of admin and alternative therapy. Too many years ago she was starstruck by Evita, Jesus Christ Superstar and Tommy whilst on a school trip from Pembrokeshire to London. After moving to the capital she branched out from musicals to drama, opera and ballet. She loves the Donmar and Tennessee Williams, gets confused by modern dance and still enjoys a sequinned chorus line. In her free time she can be found blogging, growing veggies or reading on the sofa with her cat, Ziggy, on her lap.