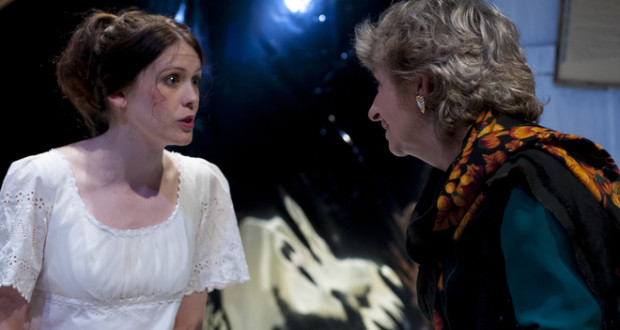 Pros: An eclectic and talented cast really bring out the comedy of the piece.

Pros: An eclectic and talented cast really bring out the comedy of the piece. Cons: The energy sometimes dips during the show. On the train to see this evening’s performance, I was reading an article in the Evening Standard about a research project going on at the Science Museum, where the participants speed-date whilst wearing paper bags on their heads. Talk about another nail in the coffin for romance! Looks-versus-personality might be a current preoccupation driving dating decisions, but what about in Nikolai Gogol’s 19th century Russia? Alas, there is little in his absurdist drama Marriage to suggest that&hellip;

This rarely seen play about the business of matchmaking and matrimony has flashes of comic greatness.

On the train to see this evening’s performance, I was reading an article in the Evening Standard about a research project going on at the Science Museum, where the participants speed-date whilst wearing paper bags on their heads. Talk about another nail in the coffin for romance! Looks-versus-personality might be a current preoccupation driving dating decisions, but what about in Nikolai Gogol’s 19th century Russia? Alas, there is little in his absurdist drama Marriage to suggest that the status-hungry middle-class search for a spouse was any more romantic.

When an ageing bachelor and court councillor can’t settle on who to marry, it takes a wily matchmaker and an interfering friend to spur him into rivalling a slew of suitors for the most eligible bride-to-be. She too is indecisive, and is prodded into selecting the court councillor from a rather unsavoury bunch of admirers who are keener on her estate than her tender heart. The absurdity arises out of the irrational and pointless push towards matrimony and the fun for the audience lies in watching it all come to nought.

This one-act production by Ballast Theatre at the Jack Studio has a fantastic cast, a solid script, and is well directed. Yet there is some unfathomable element that keeps this play from reaching the dizzying heights that only an absurd play can muster. Howard Colyer’s adaptation is admirably compact and full of witty and elegant dialogue, all of which contributes to a very nice evening out. If the liveliness of the piece was cranked up a notch, it would’ve been a fantastic evening, and I really wanted it to be. In any case, it is gratifying to have the chance to see a stellar play that is rarely performed (I couldn’t even track down a free online English translation, which is surprising for someone of Gogol’s stature). This production retains the bureaucratic setting of imperialist Russia, using a simple set design of some lob-sided empty photo frames to show that a certain warmth among the characters is amiss.

There are a good amount of funny moments throughout, helped along by some solid performances by an eclectic cast. Jean Apps as Fekla the matchmaker has all the extravagance and gaudiness of a woman out to gain trust and profit. Her rolling dialogue on the charms of the suitors she is trying to palm off is splendid to watch. And Elana Martin is the picture of pureness as the inexperienced but fretfully hopeful Agatha, inhabiting the role with total believability. Andrew Venning confidently handles the doubts and heady contemplation of the Bachelor Podkolyossin, as he mulls over the Greek philosophical statement, ‘man who lives alone is a beast’.

The unresolved strand throughout is why the interfering friend Kotchkarev, played by Dominic Cazenove, is so keen to involve himself in the ‘woman’s business’ of matchmaking and to marry off his friend? The most heated moment of the play is the closest you’ll get to an answer, where Kotchkarev explodes with anger claiming his friend should marry for the sake of his country. We somehow suspect the sentiment is more along the lines of ‘suffer along like the rest of us, mate’. This focus of the play might be what detracts from the comedy of the piece, more could have been done to bring out the farcical potential of the play. The most surprising thing I came away with was how current the play is for audiences 170 years on.