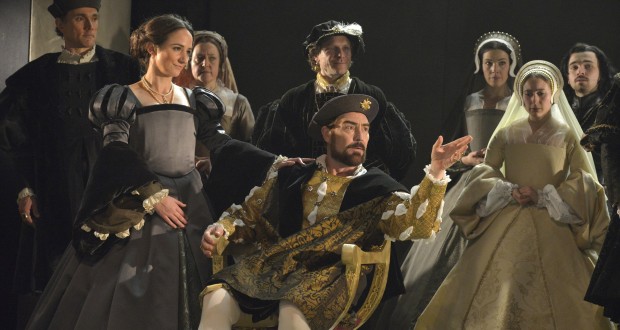 Pros: Masterful storytelling and superb acting – it’s a joy to watch these historic events unfold. The playful and cutting humour throughout was a real crowd pleaser.

Cons: The stampede through this tumultuous decade does leave you yearning for more settled moments with these moreish characters.
Wolf Hall/Bring Up The Bodies, Aldwych Theatre – Review

Pros: Masterful storytelling and superb acting – it’s a joy to watch these historic events unfold. The playful and cutting humour throughout was a real crowd pleaser. Cons: The stampede through this tumultuous decade does leave you yearning for more settled moments with these moreish characters. Wolf Hall and Bring Up The Bodies are adaptations by Mike Poulton of Hilary Mantel’s first two novels that are part of a planned Tudor trilogy. Produced by the Royal Shakespeare Company, both shows have come to London’s Aldwych Theatre after a successful and concurrent run in Stratford. Charting the political rise of Thomas Cromwell,&hellip;

Either one of these dark and humorous Tudor dramas promises an evening of pure magnificence. Seeing both in the same day promises a truly unforgettable experience.

User Rating: Be the first one !
Wolf Hall and Bring Up The Bodies are adaptations by Mike Poulton of Hilary Mantel’s first two novels that are part of a planned Tudor trilogy. Produced by the Royal Shakespeare Company, both shows have come to London’s Aldwych Theatre after a successful and concurrent run in Stratford. Charting the political rise of Thomas Cromwell, from Blacksmith’s son to the second most powerful man in the kingdom of Henry VIII, the question they pose is, how did he do it?

Fabulously, if my reaction to these performances is anything to go by! This historically precise and humorous take on how this ex-soldier, lawyer and demon-politician managed to reshape himself and his country is as riveting as theatre gets. Expect to laugh throughout, with most jokes arising from the many ironies of knowing what future holds for these characters, especially those unfortunate souls who insult Cromwell’s low birth. Yet the plays are delivered in such a way that anyone who knows nothing of Cromwell or Tudor history will find them just as appealing.

Wolf Hall opens with a flirtatious and restrained renaissance dance ensemble that illuminates an ever-present tension: the pursuit of love’s course versus the ruthless strive for political dominance. Henry naturally wants both outcomes – in the form of a new wife and a male heir. It is thrilling to watch the calculating Cromwell orchestrate Henry’s divorce from Catherine of Aragon and his marriage to Anne Boleyn. And Cromwell’s hidden grief at the dispossession and demise of the hugely charismatic Cardinal Woolsey and the death of his beloved wife is very touching. Wolf Hall, the residence of the Seymour’s (and Henry’s future wife, Jane) is never reached but tantalisingly glimpsed in the play’s final moment, leaving you hungry for the second instalment.

I found the drama in Bring Up The Bodies to be more focused and penetrating. Woolsey, Thomas Moore and Cromwell’s wife continue in death to appear on stage, serving as haunting reminder of a past world no longer retrievable. The richly layered storytelling succeeds in conveying a stronger sense of Cromwell. Trickery, intimidation and torture are the methods used to secure the destruction of Anne Boleyn, where Cromwell fabricates and distorts the evidence and testimonies of the young men in her company. By the end you understand the nature and workings of his remarkable ambition.

Christopher Oram’s simple set of a large stone-paneled room coupled with subtle lighting provides stunning visuals throughout. Home fires and candles are used to soften this otherwise hard, cold and imprisoning medieval world. Thanks to Director Jeremy Herrin’s deft staging, you never feel lost. The fine cast of over 35 move effortlessly through an array of locations, each new scene beginning just as one is about to end. A finger snap is all it takes to transport you from the Cromwell’s household, to the King’s court or chamber, from a boat riding up the Thames, to a Tower prison cell. Christopher Oram instead puts all elaboration into the period costumes. The contrasting gowns of the three queens are particularly exquisite, the detail of which is matched by their distinctive and regal bearings – a powerful and embittered Katherine, a seductive and savage Anne (her first shriek on stage is terrifying!), and a modest and quiet Jane.

Ben Miles makes a superb Cromwell, displaying a quick intelligence and alertness, as the stakes rise. He comes close enough in looks to Hans Holbein’s thuggish portrait of Cromwell for my taste, managing to seem threatening and brutal to the King’s opponents. Yet he is fatherly and paternal to his children, and at times, to the King himself. Plenty of Cromwell makes it from page to stage, though I’m sure many readers of the books will have their quibbles and objections. The pace of events does at points compromise our understanding of the history Mantel and Poulton work so hard to assert, such as the brief treatment of Thomas More. But the payoffs of these splendid shows are too many for these to matter.

It’s worth noting that tickets are still available to buy for both performances, with best availability in July and August. Day Seats are available to purchase in person at the Box Office from 10:30 a.m. on the day of performance. For those of you who can, there is something immensely satisfying about seeing both shows on the same day. I was worried about it being too much to absorb but I was definitely pleased to have had what felt like a total experience. But as Cromwell might say of vengeance, I’ll say of either performance: it’s good any time you can get it!