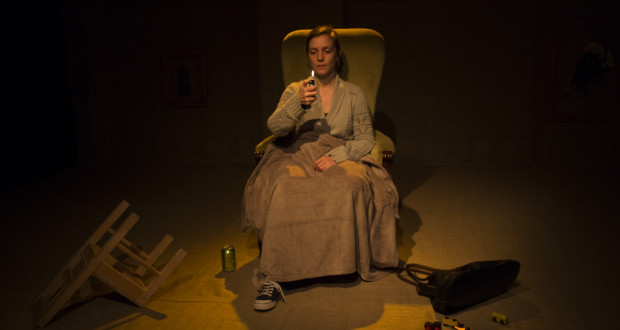 Pros: Some lovely performances and the great dialogue truly reaches out and connects with the audience.

Pros: Some lovely performances and the great dialogue truly reaches out and connects with the audience. Cons: Maybe not an obviously entertaining subject but the humour makes it easily palatable without sacrificing emotional integrity. Scottish Widows is the new play by Olivier Award Winning Playwright Grae Cleugh and has already been likened to a Scottish version of Alan Bennett’s Talking Heads. A compliment or a pressure to live up to expectations? The theme of this evening's drama was widowhood and we were given four perspectives on coping with the shock of losing a partner and forging a path forward alone. With a sparse&hellip;

Scottish Widows is the new play by Olivier Award Winning Playwright Grae Cleugh and has already been likened to a Scottish version of Alan Bennett’s Talking Heads. A compliment or a pressure to live up to expectations? The theme of this evening’s drama was widowhood and we were given four perspectives on coping with the shock of losing a partner and forging a path forward alone.

With a sparse set and an armchair taking centre stage, the focus was completely on the actors. All three performers totally absorbed their roles, captivating the audience and connecting strongly with us through their natural, conversational dialogue, within this minimal yet highly intimate space.

Andrea Miller took on the first and final roles.  Her first  feat on stage was as a gentle, very nicely spoken lady. Someone who had led a sheltered life and could not even dream of imagining a life without her husband. I saw her as your stereotypically lovely granny; that is until her grief took her (and us) through a series of events which although highly comedic, were also rather cringeworthy and strangely gruesome.

The evening’s token male perspective was provided by Billy Riddoch, whom, in the initial stages of his wife’s death, took to staying at home rather than facing the social life he had shared with her. When eventually cajoled into a social gathering, he was surprised to discover he’d become catnip for all the local widows on the prowl for male company. As he came to enjoy and even embrace the female attention, his new-found popularity soon landed him in hot water…

As Riddoch’s story ended and the interval came and went, Laura Glover arrived on stage to give us the story of a much younger woman to Miller’s elderly offering. Suddenly bereaved and left with two children to care for, she conveyed to us her sad, strained struggle to get through each day.  As time passed for Glover’s character, we were shown how she was able to cope with the pain of her memories. I found this to be a gritty, modern account of young widowhood, a subject seemingly less recognised in society today.

The evening ended on a colourful note with the return of Miller as a widow who had found a new lease of (sex)life within the throes of a holiday romance. Constantly topping up her Martini Rosso, she told us tales of her young, Turkish lover. We saw her determination to rise above all the tutting she encountered at the local Co-op and realised that her character was canny enough to know what she represented to this young, foreign man. She delighted as a shrewd, clued-up lady with her eyes wide open to the world around her and looking bravely to the future.

Four very different experiences of widowhood with some humorous and shocking twists, made for an entertaining evening of theatre. Although none of the tales were reliant on being told by Scots, the intonations of the Scottish accent somehow added to the comedy element, also allowing the opportunity for good-natured digs at the English and a play title familiar to many of us.

As I spent the evening enjoying Cleugh’s amusing yet melancholy offerings, I had some thoughts of my own. Maybe there’s a story in there somewhere of a relieved widow, finally released from a tough marriage. We take divorce for granted now but our elderly folk hail from a time when it was a tough option for a woman to leave the security of wedlock. Just a thought really – maybe something for Scottish Widows II?

Working at discovering the meaning of life. Debbie has a chequered past of admin and alternative therapy. Too many years ago she was starstruck by Evita, Jesus Christ Superstar and Tommy whilst on a school trip from Pembrokeshire to London. After moving to the capital she branched out from musicals to drama, opera and ballet. She loves the Donmar and Tennessee Williams, gets confused by modern dance and still enjoys a sequinned chorus line. In her free time she can be found blogging, growing veggies or reading on the sofa with her cat, Ziggy, on her lap.