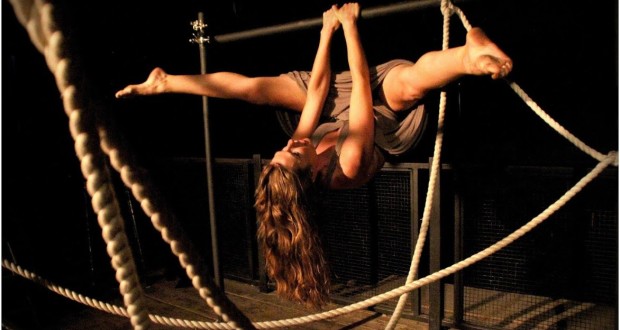 Pros: Mesmerizing! The haunting script was breathed to life with a primordial and riveting sensuality.

Pros: Mesmerizing! The haunting script was breathed to life with a primordial and riveting sensuality. Cons: The theatre is tricky to find. Bring a good map. Over a thousand years ago, there was a Greek poetess whose name was Sappho. Today very little of her poetry remains, but the gaps in her history is what Sappho . . . In 9 Fragments explores. Writer Jane Montgomery Griffiths beautifully marries the ancient world to the present, creating a haunting glimpse into Sappho’s story. The Arch 1 theatre is a truly unique venue. It is nestled under a bridge, which my&hellip;

User Rating: 4.75 ( 1 votes)
Over a thousand years ago, there was a Greek poetess whose name was Sappho. Today very little of her poetry remains, but the gaps in her history is what Sappho . . . In 9 Fragments explores. Writer Jane Montgomery Griffiths beautifully marries the ancient world to the present, creating a haunting glimpse into Sappho’s story.

The Arch 1 theatre is a truly unique venue. It is nestled under a bridge, which my map did not indicate. I spent about five minutes wandering around looking for the right road, so having a good map is a must!

When I entered the theatre, there was an immediate sense of travelling underground, almost like going into a cave. Straight away, warmth embraced us, as the rest of the audience and I descended into the subterranean theatre. The scent of incense wafted through the air. Every sense was instantly engaged, which is rare (how many times is smell engaged in theatre?), but utterly delightful. I commend the director, Jessica Ruano, and the design team for their thoroughness.

The Arch 1 is a tiny theatre. It is not for the claustrophobic. However, I felt a strong sense of community with the other audience members. As we sat expectantly on cushions and wooden chairs, I felt like we were congregating around a campfire. It was a primal feeling. Like our ancestors, we gathered together to hear the story.

The set was minimal: nothing more than a black metal frame in the shape of a box. Its walls were gently rustling white cloth that seemed to breathe with expectancy. Strung through the middle of this nebulous space were ropes, placed there either to restrain or contain, I couldn’t be sure. Orangey-yellow lighting filled the room like the glow from a fire. Behind the curtains lingered the disembodied Sappho, played by the sensual and evocative Victoria Grove.

Suspended above the ground, her husky voice seemed to speak from the past, first in Greek, then in English. As she began her tale, all that could be seen were shadows. I was reminded of Plato’s allegorical cave, and we, the audience, were willingly chained to every word.

Like the shadows on the cave wall, Sappho’s truth is hidden. As Ms Grove tears at the sheets revealing herself, we hear a broken-hearted woman, who has been lost to history. Only fragments of her remain.

Like the set, the costuming was simple and unassuming. Just a simple grey dress covered Ms. Grove, cloaking her body, but leaving her arms bare. It was like she was wearing a ghost of the past. Her hair was unbound and her skin natural. There was nothing to distract from her performance.

It was Ms Grove’s voice, her deep resonant tones, that drew me in. With a single look, she captured her audience and held us all spellbound. The story she tells is a little jumbled, reflecting the bits and pieces of poems that have survived.

As she says repeatedly, there are holes in what we know about the ancient poetess. For centuries, people have been ‘pushing words’ into her mouth. Ms. Grove invokes the desperation of historians to marry together the pieces that are left of Sappho’s work. Each, she notes, wants to Sappho to be for them. She laughs and rails, and then falls into despair.

You don’t have to be a classicist to enjoy this play, nor do you have to know anything about Sappho herself; although it would make the play a richer experience. This is a must-see show that I’m still thinking about days later. I will definitely be seeing this one again!