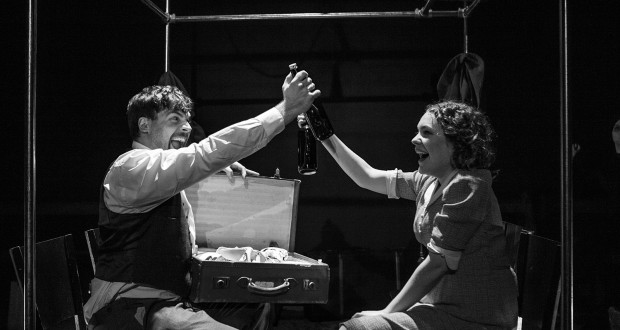 Pros: Multi-talented actors, great character vignettes, and a story that intrigues throughout.

Pros: Multi-talented actors, great character vignettes, and a story that intrigues throughout. Cons: As an adaptation, certain aspects felt a bit rough and loose. Ah, a London Underground Tube strike; ignored by the super-rich, loved by the super-lazy. I’d managed to wangle a day working from home, for the precise reason that the sustained and pungent fumes from bus armpits might have affected my performance in the office. It was only at around 6, after I’d cleared out my fridge of Rolo fromage frais, did I remember I had a play to get to. A Dashing Fellow takes the&hellip;

A very enjoyable piece that is definitely worth the watch. Could have benefitted from being a bit more ambitious with the staging and adaptation of the source stories.

Ah, a London Underground Tube strike; ignored by the super-rich, loved by the super-lazy. I’d managed to wangle a day working from home, for the precise reason that the sustained and pungent fumes from bus armpits might have affected my performance in the office. It was only at around 6, after I’d cleared out my fridge of Rolo fromage frais, did I remember I had a play to get to.

A Dashing Fellow takes the form of an adaptation of Nabokov stories, held together by a wicked ringmaster-esque Devil. The 1930s setting and the cloudy dusty scaffolding used to represent a train station were a world away from the gleaming corporate environs surrounding the New Diorama Theatre. I’d never been to this venue before, but my friend had. He also had a car. I’d chosen him wisely.

The play started intriguingly, with an off-the-cuff riff from the aforementioned Devil, glammed up in elegant but sinister drag. He then proceeded to introduce the other cast members: a miserable train conductor trying to find his long lost wife; his wife who’s unaware he’s there; a womanising ogre; a temptress; and a nerdy pervert. It was like a Big Brother producer’s dream.

On the whole, the play was well executed and very entertaining. Musical elements added nice refreshing interludes to the action, and the staging (manoeuvred by the actors themselves) shifted organically in front of our eyes. Certain aspects of the choreography did seem a bit loose, which I suppose is hardly surprising given the cast had an awful lot of work to do.

I did feel the dialogue lacked a bit of zip at times. The characters’ stories were intertwined throughout, cleverly centring in the train station. Even though this merging was unique to the play (Nabokov’s stories are separate), I couldn’t help feeling that the writer was being very faithful to Nabokov’s original text – no problem there, he’s a bit of a dab hand at writing I’m told – but it meant I found myself at times getting lost in the poetry of the words and forgetting that I was actually watching a drama.

If it had been either far more theatrical (embracing the Devil’s Cabaret homage even further), or a lot more understated and human (the characters were dangerously close to being caricatures), then I might have engaged just that bit more. As it happened, at the end I was keener to go home and read Nabokov’s stories, rather than appreciate the adapted drama on its own merit.

However this shouldn’t really draw attention away from the fact that, had it not had a world-renowned master writer as its inspiration, the play would still be an enjoyable watch with accomplished acting and some nice touches from the director. Yes, it would have been great for it to have pushed the boundaries and presented something truly outstanding and magical given its privileged basis, but it didn’t, and that’s fine. And as I left the theatre and began my long rickshaw-journey home (my friend had ditched me), I thought to myself “appreciate what you’ve got, because you never know what’ll happen if you always demand more.” Try telling that to the RMT.