You can use WP menu builder to build menus
Home » Reviews » Drama » We Are Proud to Present…, Bush Theatre – Review 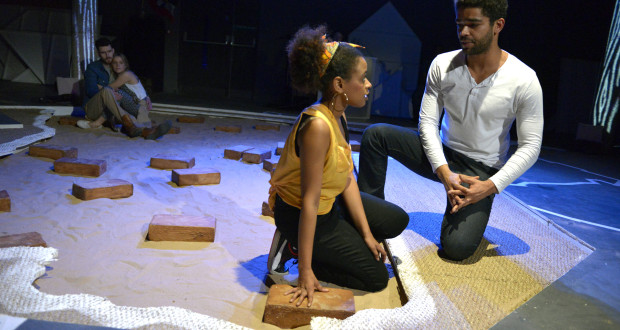 We Are Proud to Present…, Bush Theatre – Review

Cons: Too much to talk about and not enough time. The narrative lack clarity.
We Are Proud to Present…, Bush Theatre – Review

Pros: A striking and courageous play that raises questions often conveniently left unasked. Cons: Too much to talk about and not enough time. The narrative lack clarity.  My first thought after walking out of the Bush Theatre auditorium at the end of this show was that I already regretted offering to review it. We Are Proud to Present a Presentation About the Herero of Namibia, Formerly Known as Southwest Africa, From the German Sudwestafrika, Between the Years 1884 - 1915, as the full title goes, is one of the most intriguing, provocative, jumbled and confusing pieces I’ve seen in&hellip;

A thought-provoking piece that, despite its flaws, is worth your time.

My first thought after walking out of the Bush Theatre auditorium at the end of this show was that I already regretted offering to review it. We Are Proud to Present a Presentation About the Herero of Namibia, Formerly Known as Southwest Africa, From the German Sudwestafrika, Between the Years 1884 – 1915, as the full title goes, is one of the most intriguing, provocative, jumbled and confusing pieces I’ve seen in quite some time, and somehow seems to defy being made sense of. But here goes…

We Are Proud to Present… is a show about six actors putting together a ‘presentation’ on the genocide of the Herero, a people indigenous to Namibia. In this little-known episode in pre-World War I history, the colonising German army killed tens of thousands of Herero by driving them out into the desert without food or water. As you can probably imagine, coming up with an adequate way to relate these events puts quite a bit of strain on the group, and life starts to imitate art (or vice versa?) when the actors increasingly divide themselves into white and black.

Playwright Jackie Sibblies Drury raises a number of provocative and worthwhile questions about political correctness and stereotyping, the process of making and relating history, and even theatre’s ability to, for lack of a better word, correctly depict events such as these. Unfortunately this, and more, all has to be related in a mere 100 minutes, which turns out to be rather overambitious: each argument is followed by the next at such a pace that it leaves you little time to think. It’s a shame as well that the discussion of these issues is mainly confined to the framing story of the theatre company; as much as I enjoyed the theatrical in-jokes about active verbs and regional accents, the actors’ self-indulgent obsessing takes up time that could have been used discussing the actual topic of the Herero genocide. The jumping between the play and the play-within-the-play doesn’t do much for the overall clarity either, and left me surveying the action from a distance with a vague sense of bewilderment as to what point Drury is actually trying to make.

While the play does not reach its full potential, it’s a gutsy attempt at cutting through the niceties that are used in our ‘open-minded’ society to mask underlying prejudices. The actors play their characters with an admirable sincerity, which goes a long way in keeping you engaged through the confusion and empathising with the caricatures they put on stage. Ayesha Antoine in particular is fantastic as the self-appointed artistic director, both vulnerable in her personal quest to find her heritage and infuriating in her sometimes tyrannical treatment of the others.

Lisa Marie Hall’s set is a beautiful mishmash of sand, multi-functional jigsaw pieces and crates, enhanced by bits of animation and a cleverly used live-feed from a handheld camera. The decision to leave the house lights on for large parts of the show pays off as well, reducing the metaphorical distance between audience and actors and making the spectators accessories to the horrific climax of the piece.

We Are Proud to Present… is not a perfect show. In some ways it’s not even a likeable show. But it’s an audacious and provocative way of dealing with an important issue, and if Tuesday’s audience was anything to go by, it will leave you with more than enough material to fuel a spirited debate on your way home.