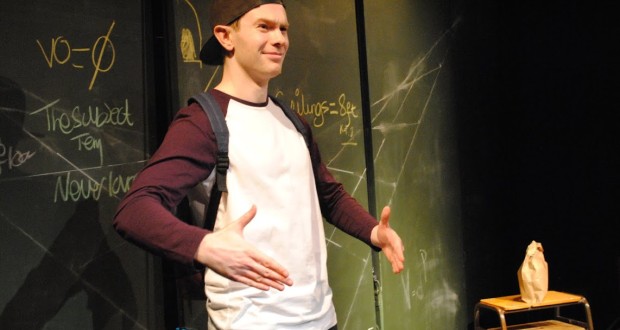 Pros: An outstanding performance from Rosie Day as Dot.

Cons: Some of the subject matter was a little tough for this American to consider.
Velocity, Finborough Theatre – Review

Pros: An outstanding performance from Rosie Day as Dot. Cons: Some of the subject matter was a little tough for this American to consider. In Velocity at the Finborough, we meet precocious 15-year-old Dot. Fed up with her parent’s laissez-faire attitude to her upbringing, and in the hope of shaking up and changing her family, she decides to explode her father out of the 73rd floor of his office building. Dot treats this as a science experiment, and as he falls – which we’re told will take 6 seconds but is cleverly spread throughout the evening – she examines&hellip;

Interesting and thought-provoking theatre with an odd premise.

In Velocity at the Finborough, we meet precocious 15-year-old Dot. Fed up with her parent’s laissez-faire attitude to her upbringing, and in the hope of shaking up and changing her family, she decides to explode her father out of the 73rd floor of his office building. Dot treats this as a science experiment, and as he falls – which we’re told will take 6 seconds but is cleverly spread throughout the evening – she examines her family dynamic. Meanwhile Dot also attempts to practically apply a physics hypothesis, in an attempt to improve her life.

The stage set is designed to look like a classroom, with scientific formulas and scrawls marked in chalk on the walls and the ground. Dot adds to the chalk marks whilst moody Lorde songs play in the background, and then delivers an opening monologue of sorts to explain what sort of experiment she’s doing, and why. The dance performed by her too busy to be bothered parents at this time helps to explain a lot to the audience.

The show then uses the imagery of Dot’s father falling from his office building (a swaying Nicholas Cass-Beggs on a ladder) to fuel the narrative of the show, whilst the audience watch flashbacks and insights into Dot’s life. Although, you never know for sure which scenes are real and which ones are merely part of the 15-year-old’s overly sensitive imagination.

The acting is wonderful. Rosie Day does a brilliant job of portraying the conflicting line walked by Dot between the precocious and clever child she was, and the depressed and sexually vulnerable teenager she is becoming.

The coming-of-age of fifteen-year-old Dot is intriguing, and provides far more complex and interesting subject matter than her science experiment. The sexualisation of someone who is still in so many ways a child is tumultuous subject matter, and gains its greatest strength when Dot’s often reckless sexual behaviour is contrasted against that of her virginal and naive best friend, Ming (played by a delightful Siu-See Hung). This juxtaposition brings about great dramatic effect especially during a gag-inducing scene at a strip club.

This play is certainly interesting, engaging, and the narrative moves well. Where I struggled with the play is with the constant running imagery, and the topic of a man being exploded out of a tall office tower from a high floor. I grew up in America, and when I was Dot’s age I had to watch businessmen falling off skyscrapers, and it was not entertainment. Dot repeatedly questions whether or not the falling man would pass out before he hit the ground, and I found it impossible not to hope that would be the case. It’s difficult subject matter, and I struggled to separate what I was seeing in front of me with what happened in New York – which begged the question of whether or not I was supposed to separate it, or include it in my understanding of the play. Is this really rather obvious parallel meant to be analysed? And what conclusion is the audience meant to receive from it?

The play is well written, and at times very funny, but it struggles from being too ambitious with the reach of the subject matter. The crux of the plot stems around the too busy for each other family unit, and Dot’s sexual awakening. However, half hearted and unexplored titbits of middle-class racism, terrorism, teenage murder-suicides, and sexual assault all pepper the production too, but without delving too deeply into their rather complex issues. Few characters (baring Ming) are likeable and kind, and it’s tough to see what the actual impact of the play would be on the family.

Teenagers and adults would enjoy the play, but it could make for some awkward viewing for a teenager watching it with their parents in tow. It’s certainly engaging and leaves the viewer with much to think about afterwards, but its star selling point is Rosie Day as Dot— and it is worth seeing the play for her performance alone.