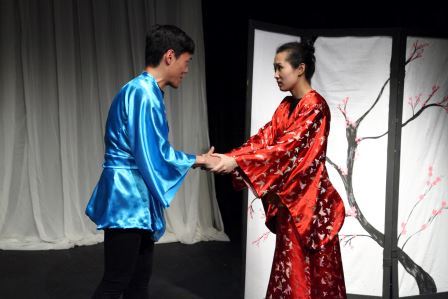 Cons: Jokes for the grownups in the audience fell a bit flat.
The Butterfly Lovers, Blue Elephant Theatre – Review

Pros: Villain defeated by butterfly attack. Cons: Jokes for the grownups in the audience fell a bit flat. When you arrive at the Blue Elephant Theatre, a trail of confetti butterflies leads you upstairs to the café and bar. I was so entranced by following these butterflies that I completely missed the box office on the way in. For the record, it's on the left at the first turning off the stairs. Upstairs, the café has beautiful Chinese lanterns hanging from the ceiling and on the day I went, the staff were all in butterfly-themed shirts. So basically a&hellip;

User Rating: 2.28 ( 2 votes)
When you arrive at the Blue Elephant Theatre, a trail of confetti butterflies leads you upstairs to the café and bar. I was so entranced by following these butterflies that I completely missed the box office on the way in. For the record, it’s on the left at the first turning off the stairs. Upstairs, the café has beautiful Chinese lanterns hanging from the ceiling and on the day I went, the staff were all in butterfly-themed shirts. So basically a butterfly-palooza, which is generally a good start to things.

The theatre ceiling is hung with flickering Chinese lanterns too, complementing a simple but effective scenic design by Beth Heaton complete with painted screens and a large gauzy scrim at the back of the stage. These serve throughout the show to conceal the shadowy golden figure of the Emperor (Willie Liam), who displays his wickedness through solemn decrees like forbidding people from playing games or instruments. He punishes those who defy him by throwing them into dungeons with big hairy spiders. Also girls aren’t allowed to go to school. Why? Because the Emperor said so, that’s why.

One of the Emperor’s chief advisors teaches his unruly daughter Zhu (Shuang Teng) in secret. But soon he tells her to put aside childish thoughts of gender equality and learn to be a lady. Zhu then hits upon the crafty scheme to disguise herself as a boy and run away to school. Arriving at the school of (supposedly) wise man Mr Ma (Matt Lim), she quickly makes an enemy of the popular student Liang (Martin Sarreal). Hijinks ensue.

To absolutely no one’s surprise at all, the two rivals ultimately learn to be fast friends, becoming utterly inseparable. This is largely to do with a bonding experience they share while saving a large Emperor Blue butterfly which falls from the sky, but it’s helped along by a rather sprightly song about friendship that Mr Ma forces them to sing together. When the Emperor announces that he is to be married to Zhu, Liang discovers the truth about his friend and decides to help her escape from the wicked Emperor. (Liang is loyal, yes. Clever? Maybe not so much.) How do they escape? By turning into large golden butterflies, of course. Everything ends just as it should in children’s theatre, with the villain vanquished and by a swarm of butterflies, which are evidently more vicious than they look and the heroes reunited. Liang and Zhu perform a touching golden-winged dance in their dazzling butterfly forms and all is clearly right with the world (even though Zhu never does get to finish her education after all.)

Unfortunately, the audience participation bits fall a bit flat. Perhaps this crowd was particularly reticent but the actors struggle to get the youngsters to do things like sharing their favourite subjects at school and helping Zhu learn how a boy should walk instead of a girl. James Chamberlain and Jason Yu have peppered the script with references designed to appeal to the grownups too, but an extended joke around the song, What Does the Fox Say? flies in that medium space over the heads of the youngsters and under the radar of the adults. I laughed, but I think I was the only one. There was also a prop malfunction when the Emperor Blue butterfly falls out of the sky again right after Zhu and Liang rescue it, somewhat undermining its symbolic effectiveness. All these things can be smoothed out in the course of the run, though, I have no doubt. Hey, any show with a swarm of butterfly assailants in it is okay by me.