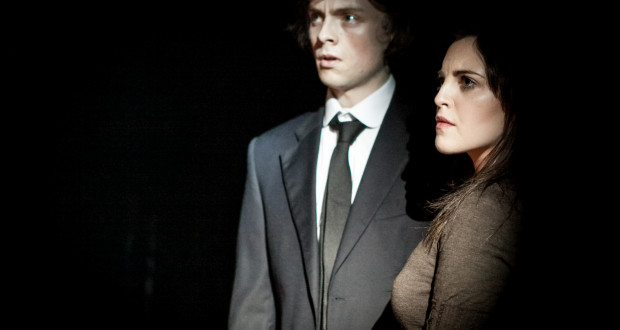 Cons: There are reasons why this is a rarely performed musical, namely, the show itself has structural flaws
The Beautiful Game, Union Theatre – Review

Pros: Excellent performances and inventive direction of a rarely performed musical. Cons: There are reasons why this is a rarely performed musical, namely, the show itself has structural flaws As someone who is not a huge Andrew Lloyd Webber fan and has a dislike of football, I did not have high expectations for this production. I was, delightfully, proven wrong for the most part. Creative direction, fantastically tight ensemble work, endearing characters and some beautiful ballads were some of the highlights of the show. There were however some rather trite lyrics in some numbers and after a lengthy first&hellip;

A show that captures the youthful exuberance and struggles of growing up in The Troubles but with some weak writing and music.

As someone who is not a huge Andrew Lloyd Webber fan and has a dislike of football, I did not have high expectations for this production. I was, delightfully, proven wrong for the most part. Creative direction, fantastically tight ensemble work, endearing characters and some beautiful ballads were some of the highlights of the show. There were however some rather trite lyrics in some numbers and after a lengthy first half, the second half seems to completely lose its way. There was also a conspicuously absent show stopping final number, making the writing feel rushed and unresolved. It is clear why this show has not been revived since its West End run in 2001, but it has some uniquely charming elements and focuses more on the politics of the time rather than football.

Lotte Wakeham uses the intimate Union Theatre space brilliantly. Traverse staging creates both a joyful football pitch and the dangerous streets of 1970s Belfast. During the football matches, the characters watching the game stand behind the audience so we are part of the experience. A simple but threatening barricade at one end and barbed wire around the theatre’s pillars serve as a constant reminder of the danger of the teenagers’ everyday life. Political activists leaflet the audience advertising rallies for both the Protestants and Catholics. Direct address is unavoidable in such a layout and as such, the audience feels great empathy with these young people growing up in such extraordinary circumstances. Choreographer Tim Jackson uses Wakeham’s staging particularly well during The Final, where the football team plays their championship in a brilliant piece of dance. A few benches are versatile set pieces; they become church pews, locker room benches and a coffin.

Niamh Perry leads the young but skilled ensemble as the charming, feisty Mary who falls in love with 18-year-old footballer John, played by a skillful Ben Kerr. We see them blossom into adults, marry, and irrevocably change after John is arrested for helping a friend who happens to be an IRA terrorist. Two of the best numbers in the show are theirs, Don’t Like You and The First Time. Perry and Kerr have genuine chemistry and their characters’ optimism and budding love is adorable. Joanna O’Hare is the other shining star as the Protestant Girl who duets with Mary in God’s Own Country. Here, the audience sees the root of the conflict: both sides have unwavering belief that Ireland is theirs. There is good contrast between the serious, political scenes and those surrounding the football pitch and social events.

The lengthy first half ends with the death of one of the team members after the late-night conclusion of the victory party. The second half starts with John and Mary’s wedding, but the plot deteriorates from this point. Suddenly, the characters have aged and are going their different ways. Whilst this is a sad fact of growing up, it is the undoing of a musical that relies too heavily on the misadventures and celebrations of youth. Some of the characters move away and John is in prison. When he is released, he considers going to England to fight for the cause. We see a Mary who is defeated and worn out from being a single parent. There is no more joy or celebration. The story abruptly ends with a short, quiet number, with little resolution. This is the fault of the book rather than the actors, who do a remarkably convincing job of following their characters’ journeys.

Overall, this show is certainly worth seeing for the novelty factor of its rarity and the excellent performances by a cast with impressive credits. However, the script and the typical rock/pop Webber numbers let it down.

Previous: My First Ballet: Coppélia, Peacock Theatre – Review
Next: In This House (A Family Breakdown), The Space Arts Centre – Review