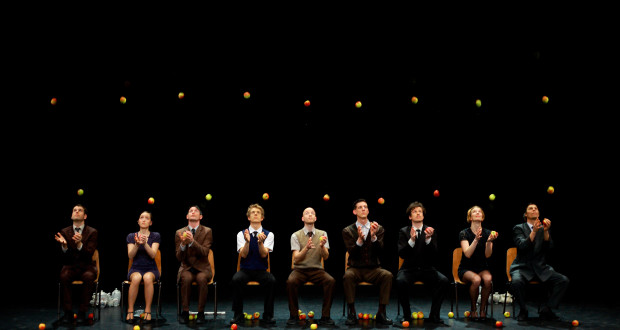 Cons: There was so much happening so fast on stage that I’m sure I missed some crucial moments.
Smashed, Southbank Centre (Udderbelly) – Review

Pros: It’s fast, it’s fun, a brilliantly talented, comic and clever ensemble. Cons: There was so much happening so fast on stage that I’m sure I missed some crucial moments. Can a group of nine mostly silent performers throwing around apples hold your attention for an hour? Apparently, they can. Gandini Juggling invites us to a rather unusual tea party that includes 80 bright red apples, a mismatched set of tea crockery, and a whole load of talent, inventiveness and complexity. Smashed has already been performed at the Edinburgh Fringe and the Royal Opera House, and it is now showing&hellip;

Apples fly around with intense precision in this mesmerising, comic and brilliant performance that spans juggling, theatre and mime.

User Rating: Be the first one !
Can a group of nine mostly silent performers throwing around apples hold your attention for an hour? Apparently, they can. Gandini Juggling invites us to a rather unusual tea party that includes 80 bright red apples, a mismatched set of tea crockery, and a whole load of talent, inventiveness and complexity. Smashed has already been performed at the Edinburgh Fringe and the Royal Opera House, and it is now showing in the great purple cow-tent as part of the Southbank Centre’s Udderbelly Festival.

Inspired by the work of German theatre-cum-dance artist Pina Bausch, Gandini Juggling serves up an evening that spans circus, theatre, dance and mime. The performance is characterised by constant movement through juggling, as the artists, all smiles and cheeky nods into the audience, throw, toss and hurl their apples into the air and at each other. The apples move so fast that most of the time, one cannot tell who threw them and who will catch them, but not a single apple ever falls from the perfectly synchronised group.

The performance balances intense concentration and easy nonchalance, tension and serenity, silliness and incredible skill. Not a single glance, smile or nod seems to go astray – everything contributes to the performance as a whole. The show is made colourful through the petty squabbles, attractions and jealousies among the two women and the seven men. One woman receives all the male attention, the other stands alone, mooching. One man attempts to woo one woman, she rejects him for another. There is even a punishment sequence, in which one female performer slaps the men whilst she is juggling. Admittedly, it’s all pretty silly, but that’s not to say it isn’t tons of fun.

The whole show is accompanied by music ranging from Bach to the country warblings of Tammy Wynette, which heightens the sense of teasing silliness. All the performers are wearing old-fashioned suits in brownish tones, and, even though they all look similar and hardly say a word, each has a distinctive character.

And then, one apple falls and the performance turns nasty. The bland, stilted smiles and nods disappear, and are replaced by angry shouts at one another as the performers drop one fruit after another. All decorum is whipped away, and the artists hungrily, greedily bite into their apples, still attempting to juggle, bits of apple and juice flying. Taking an obsessive delight in this destructive turn, they seize whatever they can get their hands on, smashing tea cups and saucers, apples and chairs. The chaos is perfect. The rigorous structure that has so far characterised the show is annihilated.

Then, regaining control, they once again get in line, this time rather ashamedly, and re-visit their first sequence, carefully stepping over broken shards and pieces of apple. Their flashy smiles are replaced by subdued glances, and I felt as though I had just witnessed a wild animal being tamed. I did feel a bit wary of the 80 smashed apples and teacups, but, on the whole, it was probably worth it.

If you can’t make the performances at the Udderbelly, Smashed is touring throughout Europe and the UK – dates are here.