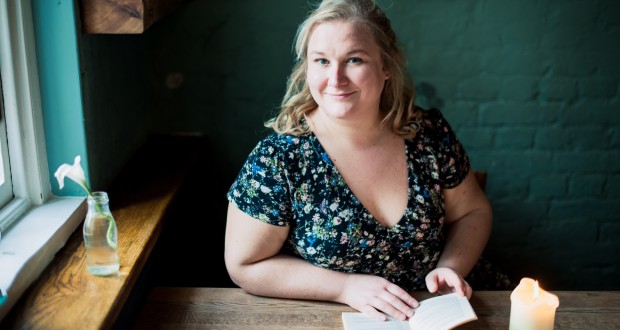 Everything Theatre’s Charlotte L Rose talks to Rebecca Atkinson-Lord, Director of Theatre at the Ovalhouse in Vauxhall alongside Rachel Briscoe. She is a founder of Arch 468 – a production and development hub in South London – and Board member of Dante or Die. She lives in Brixton with her husband.

Bawling her eyes out on stage as a duck in the nativity didn’t mark out the beginning of a successful career in performance for Rebecca, but she soon found pleasure in reading poems, and performing in Oliver and As You Like It at a convent senior school. “I got to play the fat old maid and I think as a teenager that quite traumatised me a bit, it shaped how I thought about myself. There was no way in hell I would ever have even auditioned for Ophelia cause I was Mr Bumble.” Though her family weren’t fans of the theatre, the influence of a “phenomenally inspiring” drama teacher – Carol Danbury – led Rebecca to apply and get a place at drama school.

The only way a society defines itself is by the stories it tells about itself, to itself. The quickest way to change anything is to change those stories, and we are the storytellers.

Visits with Carol to places like the Manchester Exchange, the RSC, and the REP in Birmingham inspired Rebecca to pursue acting, but due to an accident, drama school ceased to be a possibility, and Rebecca accepted an offer from Bristol University to study Ancient History and Classics.

At Bristol Rebecca rekindled her love of the stage from a new angle: directing.“When I was there I directed a play and I was like oh, yeah, here we go, this is the thing. I just really loved it. I still miss performing, but I wouldn’t ever want to give up the agency of being a director.”

Engaging with an audience is about more than theatre to Rebecca – it’s a political and social action. “If you’re a nationally funded theatre you have an obligation to engage with the full spectrum of our national population. If you don’t do it you’re just going to die as an organisation, so the question is why wouldn’t you? The only way a society defines itself is by the stories it tells about itself, to itself, and the quickest way to change anything is to change those stories, and we are the storytellers. I want young people to be more empowered, politically active, and I think you should be able to vote from 16, probably before.”

Things have moved on for Rebecca since her first foray into theatre, and it seems like there are more women in the arts industry now. “Erica Wyman is a really brilliant figurehead for young women, and there’s Sarah Frankham, and Annabelle Turpin at Arc. But it is still a boys’ club. On paper it looks like we have all the same opportunities as men, but there are cultural obstacles. We haven’t thus far been very good at teaching young women to own their own voice. Being a director is about having the confidence in your own voice, even if it’s about your voice as part of a collaborative process. I don’t think we teach women that.”

I want young people to be more empowered, politically active, and I think you should be able to vote from 16.

Rebecca doesn’t feel like she’s in a minority as a female director, but personal and second hand experience of sexism have encouraged her to encounter those situations focusing on her creative skillset and not her gender. “I did one job, and one of the actors got drunk and came on to me. The director noticed, and treated me like shit because of it. I don’t think anyone sets out to be sexist but I think it’s there. The way I think about it is get on board with that, change the world.”

“In the physics lab at my school there was this sign that said, “Women have to work twice as hard as men to prove that they are half as good. Fortunately that’s not difficult.” I always remembered it.” As we begin to talk about the sexualisation of women, Rebecca’s thoughts and ideas turn again to the bigger political picture beyond the stage. “A woman walking naked across a stage is where we locate sexualisation in our culture but actually it’s happening at every fundamental subconscious level. Have you ever seen an ugly girl playing Juliet, have you ever seen a fat Hermia? At the point at which you lose your virility as a woman you become invisible.”

It is still a boys’ club. On paper it looks like we have all the same opportunities as men, but there are cultural obstacles.

Directed by Rebecca, Cuddles told the story of a 13 year old Vampire who has been locked in her room all her life. Photo courtesy of the Ovalhouse

Growing up in an all girls’ school under the auspices of an all female staff Rebecca became a feminist by osmosis: imbibing misogynistic messages about dress and power alongside the empowering ideals of equality that her teachers – as adults of the real sexual revolution – espoused. “We were taught one thing officially and yet all of the subconscious messages contradicted it. I think that characterises most women’s experience and I don’t know how we fix that.”

At Ovalhouse women’s stories are still being told as they were in the 60s and 70s, but the legacy that Rebecca and Rachel have inherited evolves with society, and with their audience. “We’re interested in finding out what the narrative should be now. Who are the people that don’t get to tell their stories? On the one hand it’s the same people it’s always been. The work that happened here in the 60s, 70s, and 80s has made a difference, but there is still a way to go.”

Rebecca’s ambitions for the future aren’t tame, and she wants to take the audience somewhere new, driving their opinion as much as mimicking it. “There is a myth that audiences don’t like challenging or edgy work and it’s rubbish. A story should only be told if it adds something to human knowledge or experience; if it doesn’t you probably shouldn’t be telling it.”

When asked about her success Rebecca is modest, and prefers to think about future plans than past achievements, but puts her continuing work down to “a mixture of bloody-mindedness, stamina, curiousity, working really fucking hard, and being a little bit brave when I couldn’t pay the rent.”

If you want to be a Director then be one. Call yourself a director; don’t wait for anyone to tell you that you can.

Rebecca is certainly brave creatively, but she’s also not afraid to walk out on a performance if it’s bad. “Theatre is about a shared experience with the performer. We make this contract that we will look at each other and give each other attention for the duration of the piece. That’s one of the things I would change about the world at the moment. We never look at each other really, and see each other and listen. If you’re listening you’re waiting to speak. You can’t do anything in theatre that a human being can’t do and that’s phenomenal because you can do anything in theatre; that’s the magic.”

Rebecca’s message for aspiring directors is drop the aspiring. “If you want to be a Director then be one. Call yourself a director; don’t wait for anyone to tell you that you can. Skill up, work unceasingly, and actively to make yourself the best director you can be. Don’t want for someone to give you opportunities, make them yourself. Get your mates together and do it in the park if you have to. Do it on the street, that’s theatre, people will come and watch. Put a bucket out, it might fund the next thing. It’s about having the self-belief, and feeling the right to own your identity.”