Home » Reviews » Musicals » Out of Order, The Courtyard – Review 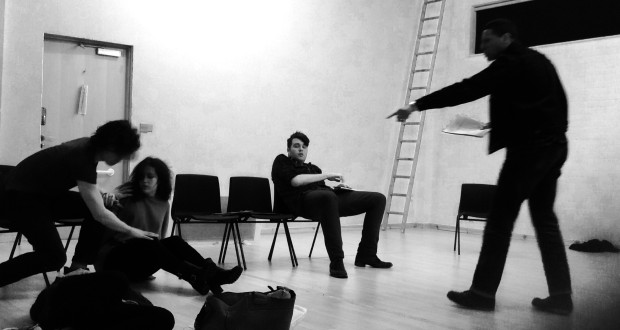 Out of Order, The Courtyard – Review

Cons: It felt like a (very good) work in progress.
Out of Order, The Courtyard – Review

Pros: Flawless musical and character performances; excellent new songs. Cons: It felt like a (very good) work in progress. I’ve not been with Everything Theatre for that long, but I have already become a bit of a cynic. Don’t get me wrong I love theatre and performance in all shapes and forms. There are certain types though, which tend to make my heart sink, and new musicals often fit into that category. So when I was assigned to review Out of Order, ‘a new musical about life on the streets’, I was a little apprehensive. The idea of it&hellip;

Out of Order has the marks of something, in a fledgling state, which has a lot of potential.

I’ve not been with Everything Theatre for that long, but I have already become a bit of a cynic. Don’t get me wrong I love theatre and performance in all shapes and forms. There are certain types though, which tend to make my heart sink, and new musicals often fit into that category. So when I was assigned to review Out of Order, ‘a new musical about life on the streets’, I was a little apprehensive. The idea of it tackling such a thorny subject matter which, as a Londoner living in Hackney, isn’t so far away from me on a daily basis also made me wary. However on this occasion I really couldn’t have been more wrong.

Out of Order tells the story of a group of young people on the edges of modern society, whose lives revolve around drug addiction resulting in petty criminality. Co-defendants Lily and Leo return to their old stomping ground after six months in prison for drug related offences. They both return with the intention of changing their ways after being ‘clean’ for the duration of their stay at Her Majesty’s pleasure. The plot follows their struggle to remove themselves from their old lives; however, predictably, their hopes of starting anew quickly unravel.

There was something about this show, playing just a bus ride away from areas where at that moment someone was probably genuinely ‘shooting up’, which unsettled me. The idea of musicals tackling such heavy-hitting issues is not new, but it is certainly a risk. Ten minutes in however, and it was hitting all the right notes. There was something about the absurdity of a bunch of homeless crack addicts leaping into song which worked really well. And that sentence sounds glib, I don’t mean it to, because the concept as a whole just worked.

The story and songs were written and composed by Gee Spazzo after years of working with drug users in resettlement projects, with community drug teams and in prisons. He decided to create the story out of the affection and frustration he experienced during this time. He felt a responsibility to tell the story truthfully and respectfully – and it definitely hit the right tone.

The acting, choreography and musical performances from every single cast member were flawless. The newly written songs were also very impressive. I can imagine it being pretty difficult to write a good new musical, but the songs were catchy, memorable and had the correct amount of pathos. In places the solos, performed most excellently by Emma Richardson and Andrew Mullan, were quite beautiful.

However, the storyline was a little predictable and it needs fleshing out to give it a bit more meat. The piece as a whole also felt like a work in progress because the ambition of the storytelling outstripped the practicalities of the performance space. By that I mean it had a lot of the marks of a West End musical in style but the staging was – obviously given the nature of the venue – quite simple. And while it’s absolutely possible to create excellent theatre with nothing this piece felt like it needed proper staging to meet its full potential. It was well directed, but it either needed even more creative direction, or a bigger budget.

Out of Order has the makings of something big. It’s a clever approach to a difficult subject matter. But, could it work on a big scale? Pretty much everyone in the UK has knowledge of the social problem it tackles, so it’s accessible enough. By rule of thumb though, musicals are often pretty commercial; I wonder about the ethics of making this sort of story commercial. It’s not something I can truly unpick here but perhaps Out of Order is one to watch.