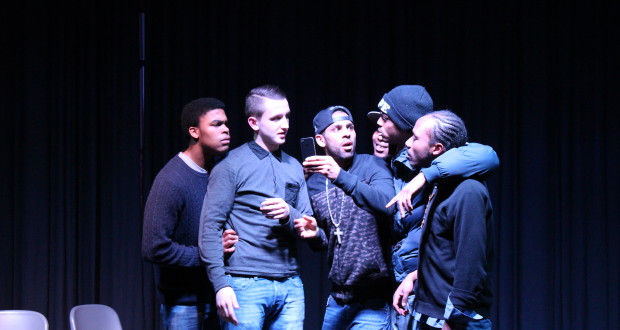 Cons: Sometimes the performances were a little over the top.
Make Me Happy, Arcola Tent – Review

Pros: Layered characters, cathartic content and an electric atmosphere. Cons: Sometimes the performances were a little over the top. Generation Arts is a company which works with young people to help transform their lives through theatre. Specifically, it “engages young people at risk, or who are not currently in education, employment or training (NEETs) and who have not had the opportunity to achieve academic qualifications previously.” Through a seven month programme (dubbed the Future Stage Project) in partnership with City and Islington College, the participants work with theatre practitioners to achieve an A-Level equivalent qualification in theatre and devise&hellip;

A thoughtful production devised by promising young actors. Part of a wonderful project to transform young lives through theatre.

Generation Arts is a company which works with young people to help transform their lives through theatre. Specifically, it “engages young people at risk, or who are not currently in education, employment or training (NEETs) and who have not had the opportunity to achieve academic qualifications previously.” Through a seven month programme (dubbed the Future Stage Project) in partnership with City and Islington College, the participants work with theatre practitioners to achieve an A-Level equivalent qualification in theatre and devise their own piece.

Make Me Happy is the culmination of this year’s programme, and is staged over three nights in the wonderful Arcola Tent. Walking into the venue, the first thing I noted was that the atmosphere was electric. Filled with friends and family as well as previous participants, the seats were abuzz with energy, joy and optimism. For example, I heard people talking about their future theatre projects, and about how drama had helped them overcome their fear of interviews. Even though this project is only in its second year, it has clearly had a big impact on the communities it works with.

The show itself was devised by the young actors who took to the stage. It followed the interconnected lives of various characters through a series of vignettes: their trials and tribulations as they struggled with school, employment, family and life. It was clear that the themes which were dealt with reflected some of the difficulties that these young people face in real life, and so the show took on a cathartic aspect. As a result, the piece had a real depth to it; the characters were layered, and each had demons to overcome, challenges to face and lessons to learn. The story also had a pleasant arc, and was bookended by recurring themes. Overall, I was impressed that such a thoughtful and reflective piece could have been produced in only seven months.

The performances were equally of a high standard, albeit perhaps sometimes a bit over the top. The director clearly did an excellent job working with the participants; some of the themes (such as mental illness, teenage pregnancy and social isolation) are difficult even for professional actors, but the young cast performed with confidence – particularly Paris Robin, whose role grappled with such themes. Other stand-out performances came from Kayan Kalipha, whose characterisation was evocative and whose presence filled the stage. Florian Rafuna also did an excellent job in his funny but challenging role, as did Unique Spenser in hers. In fact, the entire cast showed great promise and professionalism. The scene changes were smoother and sharper than many I have seen in professional productions, and they did an amazing job of holding it together when, after a particularly active scene, a bench they were sitting on collapsed. They did not corpse, but carried on and incorporated the breakage into the show.

Altogether, Make Me Happy was a good show. Sure, it wasn’t groundbreaking, and sometimes it felt a bit over the top, but that’s not the point. In a way, the real triumph was the real-life story: at the end of the programme, the participants get their qualification and are encouraged to apply for further training. Of the participants in last year’s programme, 83% are now pursuing higher education at university or drama school. If ever an example was needed for the power of theatre as a transformational tool, then here it is. Hats off to Generation Arts for their stellar work.

Previous: This Is The Moon, That Is The Earth, The Yard – Review
Next: Laqueum, The Rag Factory – Review