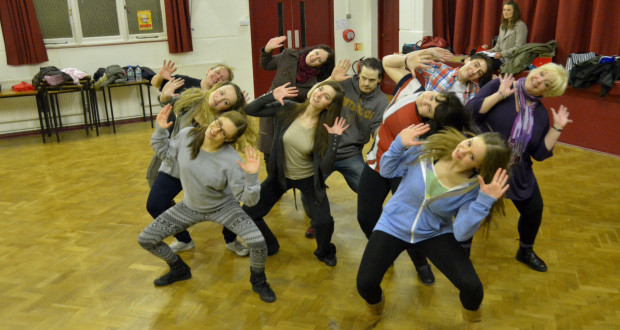 Pros: A great singing ensemble were able to produce a wonderful rendition of the music and lyrics from this modern day musical.

Cons: There were too many technical difficulties and late cues.
Honk!, The Intimate Theatre – Review

Pros: A great singing ensemble were able to produce a wonderful rendition of the music and lyrics from this modern day musical. Cons: There were too many technical difficulties and late cues. My first real experience of theatre was through a youth theatre in the centre of Birmingham at the age of 12. While I participated in a company where we were all young actors it left me with a great respect for all forms of amateur groups. Amateur dramatic groups are often teased by their more serious counterparts in the industry – I’m thinking A Chorus of Disapproval&hellip;

A great family musical, much like a summer pantomime. It’s music and lyrics are done justice by the Finchley and Friern Barnet Operatic Society however there is room for improvement for this gang.

User Rating: Be the first one !
My first real experience of theatre was through a youth theatre in the centre of Birmingham at the age of 12. While I participated in a company where we were all young actors it left me with a great respect for all forms of amateur groups.

Amateur dramatic groups are often teased by their more serious counterparts in the industry – I’m thinking A Chorus of Disapproval by Alan Ayckbourn in particular – however despite the lack of natural talent some amateur performers might have to “make it big”, these groups encourage a whole host of positive personality attributes that benefit the performers in their everyday lives such as teamwork, producing a finished project and having the guts to get up on stage and perform to a full audience – all transferrable skills that participation in the arts instils!

Honk! is staged by the Finchley and Friern Barnet Operatic Society, who have been performing since 1923. The society is compiled of both the young and the old and has a ratio of maybe 2:1 girls to boys (as is normal with performance groups). Both these attributes fit pleasingly with the story and characters of Honk!.

Based on Hans Christian Andersen’s fairy tale The Ugly Duckling, Honk! tells the tale of Ugly (Jamie Wright), a scruffy cygnet shunned by all the other poultry on the farm because of his irregular looks. Only his mother, Ida (Kim Davidson Rabin) cares about him. Soon, the tomcat (David Adams) decides he would be a tasty snack and pursues him tirelessly which ultimately leads to Ugly getting lost. Much like the tale it’s based on, Honk! is a wonderful way of presenting a message of acceptance of others and non-judgemental perception.

The show is as bright as you can imagine! The set looks as if it’s from a CBBC show and the bright coloured costumes are entertaining as well as giving you a sense of which animal they’re playing. I particularly liked the seven ducklings’ school blazers and caps. David Adams as Cat stole the show for the entire audience, his outfit was the most ridiculous and his performance as extravagant as the tiger-striped gloves he wore. Kim Davidson Rabin gave an emotional note to the show as Ida, mother duck. Jamie Wright as Ugly had a particularly enthusiastic performance, showcasing a rather notable voice. Lucy Beasley also impressed me as, despite taking on a number of much smaller roles, she kept her performance at the top of its game throughout the show.

Unfortunately there were a number of late lighting cues and the follow-spot found it difficult to find their mark first time, leaving cast members in the dark. Having follow-spotted myself I understand the difficulties. I think that getting rid of them and using a few more fixed lanterns to light the actor’s faces would have been a better choice for this show.

I also think the show was perhaps under-directed. This show sparkled during the singing sections but let itself down in between. It felt a little bit like they were swinging from one musical number to another and while a high percentage of Honk! is sung there needs to be a maintenance of energy throughout the show.

Taking into consideration that this is a show run entirely out of the love of volunteers I feel it could give a number of the small scale professional venues in London a run for its money. I rather enjoyed the show, partly because I really like the musical itself but also because they sung it so well. However a little improvement on the non-musical aspects of the show could really make it shine.

Previous: The Red Balloon, The Space – Review
Next: A Cure for Ageing, Tristan Bates Theatre – Review