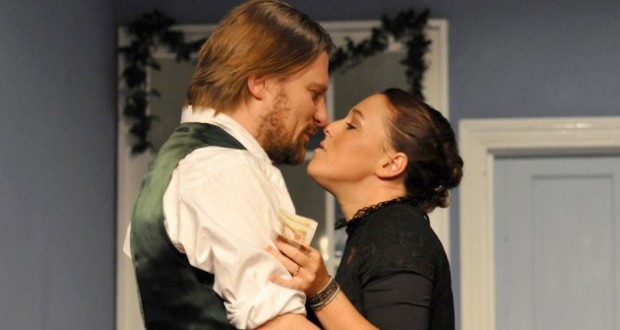 Cons: Patience is key for this show; the flow of the play only gains momentum in the final scenes.
A Doll’s House, Brockley Jack Studio Theatre – Review

Pros: Laura Kenward gives an outstanding performance as the iconic Nora. Cons: Patience is key for this show; the flow of the play only gains momentum in the final scenes. In 2006, A Doll's House was proclaimed by UNESCO to be 'the world's most performed play.' The highly celebrated script by Henrik Ibsen continues to engross audiences on the regular, and is currently running at the Brockley Jack Studio Theatre in South London. The two-hour cut is directed by Pauline and Dan Armour, and focuses on key events surrounding the last moments of the tortuous relationship between 19th century housewife, Nora,&hellip;

The world's most performed play for audiences to enjoy at a fantastic venue in South London. This one is a must for theatre lovers!

User Rating: 3.05 ( 3 votes)
In 2006, A Doll’s House was proclaimed by UNESCO to be ‘the world’s most performed play.’ The highly celebrated script by Henrik Ibsen continues to engross audiences on the regular, and is currently running at the Brockley Jack Studio Theatre in South London. The two-hour cut is directed by Pauline and Dan Armour, and focuses on key events surrounding the last moments of the tortuous relationship between 19th century housewife, Nora, and her husband, Torvald Helmer.

It would have been tough to find a better venue, The Brockley Jack has to be one of my favorite fringe theatres in London. My admiration of the Jack is due not just to the atmosphere surrounding the show (fantastic food and drink in the adjacent pub, plus the occasional pub quiz if you’re lucky and feeling in the mood), but more importantly to the consistently outstanding level of the performances. The cast of the Armours’ production tackles Ibsen with skill and depth, making A Doll’s House another quality hit for the Jack.

For those unfamiliar with Ibsen, the playwright’s forte was to explore patriarchal social systems through the figure of ‘the wife’. His tormented female characters usually battle inner and outer demons through a personal secret, and are eventually destroyed by giving into their buried truth. So is the case for Nora Helmer, expertly played by the wonderful Laura Kenward.

Nora is madly in love with her husband, Torvald (Howie Ripley). She would do anything and everything for him, as we have a chance to find out over events surrounding Christmas at the Helmer household. Yet, trouble bubbles beneath the surface. The dangerous secret, revealed early in the play to long-time friend Kristine Linde (Maleesha Adjaye-Tabansi) involves one of her husband’s employees, Nils Krogstad (David Scott Lucas) Krogstad has a horrible reputation as a con-man, and has found a way to work under Torvald’s supervision whilst engaging in shady affairs with Nora. A close family friend, Dr. Rank (Tom Collins) completes the principal cast of A Doll’s House.

The show’s pace may be frustratingly slow for some, but serves a purpose in giving the audience a chance to explore and analyze the intricate relationship between characters, particularly between Nora and Torvald. Ripley and Kenward are nothing short of sublime in their roles as the patronizing husband and the devoted girlish wife respectively. But there is more to Nora than the mask she puts on for her husband, and Kenward stratifies Nora’s personality with incredible skill. Nora becomes the mother, the liar, and even the machiavellic tease in her guarded advance towards Dr. Rank in order to keep her secret hidden from Torvald. Torvold may be a less intricate role by nature, still, Ripley’s performance succeeds in building a dangerous and controlling character, who we only come to understand thanks to the chilling and controversial ending.

The scope of the play’s events are vast, so the setting offers an anchor. The entirety of the play unfolds in the elegant but somehow simultaneously shabby living room of the Helmer home, where we find a red couch filled to the brim with cushions, a small Christmas tree to the right, Torvald’s study through a stage door on the left, and the entrance to the black-box theatre as the entrance to the family home. The remaining elements of lighting and costume are consistent and unobtrusive throughout the play.

Before the show, I had a chance to catch up with director Pauline Armour, who shared an interesting piece of information about the author: Ibsen was approached for help by the woman who inspired the character of Nora. Having turned her down, he later learned that she had ended up in an insane asylum, and this play was born as a way to atone himself with the poor lady (don’t worry, no spoiler alert there).