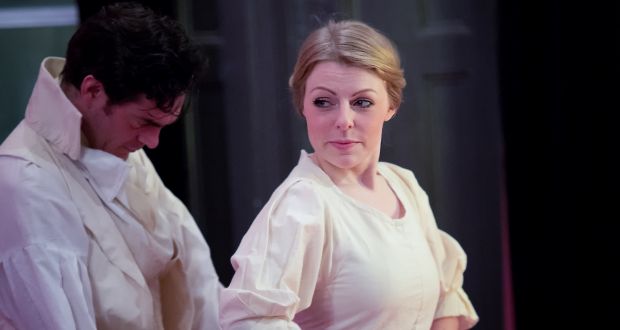 Pros: A well-loved classic of English literature brought vividly to life in this gem of a production.

Cons: An intimate performance but with a verve and energy slightly too great for such a small space. At times the action felt cramped and too close for comfort.
Jane Eyre, Rosemary Branch Theatre – Review

Pros: A well-loved classic of English literature brought vividly to life in this gem of a production. Cons: An intimate performance but with a verve and energy slightly too great for such a small space. At times the action felt cramped and too close for comfort. Brimming with pace and life, this uniquely touching production not only does justice to one of the best loved novels of all time, it also proves the value and continued relevance of theatrical adaptations. Before attending I assumed, given that the novel is such a part of our cultural heritage, that nothing new&hellip;

The closest thing to reading the novel yourself, this is an intelligent and faithful adaptation which could become a classic in its own right.

Brimming with pace and life, this uniquely touching production not only does justice to one of the best loved novels of all time, it also proves the value and continued relevance of theatrical adaptations. Before attending I assumed, given that the novel is such a part of our cultural heritage, that nothing new could be said. I believed the story dated and done to death. My thoughts turned loosely to film adaptations, only good to while away a rainy afternoon.

Dear reader I was wrong. This play is sure to please even the most ardent fan of Charlotte Brontë, arguably one of the finest English novelists of all time.

Many adaptations fail by chopping and changing plot and prose, or by labouring on some contemporary twist in set design or characterisation. Taking too novel an approach (excuse the pun) is not only distracting for the audience, but detracts from the raw brilliance of the written word.

Where some fail, this beautiful and faithful production triumphs, for all its simplicity. The play is the perfect introduction for those unfamiliar with Jane Eyre, Brontë’s classic work of romantic gothic fiction set in the wilds of northern England in the 1800s. Full credit should be given to writer and director Bryony J. Thompson, whose sympathetic direction allows Brontë’s genius to shine through.

The play has a pure aesthetic, with its set design of white washed walls, drapery and actors clad in simple white toned regency style costumes. This stripped back approach is essential for such a small space as the Rosemary Branch theatre, allowing the audience to engage fully with the performance.

The six strong cast perform a beautiful balancing act, seamlessly interchanging between characters and timeframes minute on minute. So vivid were the descriptive elements and limited the physical action that it felt like I was watching the recording of a vintage radio drama.

The verve and momentum in this play are its key strengths. One can practically see the proverbial pages of the book fly open, and as it continued Brontë’s language became more and more mesmerising in its lyricism. The cast race through the telling of Jane’s childhood until the present day, where we find her as governess to Mr Rochester’s child Adele. They pause, and the love affair to end all begins. It’s tragic, gloomy stuff, but the lesser explored themes such as religion, social class and feminism are handled with light touches of humour which the audience loved and which really served to lift the spirits.

Lilly Beck, who plays the dotty Mrs Fairfax, was particularly skilled in her delivery of the clipped quip. Helen Keely’s smarmy lady of the manor, Blanche Ingram, provided the perfect counterpoint to Jane’s quiet longing and earnest heart. Joss Wyre’s shy child Adele provided yet more laughs as she feigned a French accent, twirled and curtsied. Phillip Honeywell is solid in the role of the wilful St John Rivers, the preacher who has designs on the lovelorn Jane. The gentle hits of satire by this particularly strong supporting cast allow lead actors Hannah Maddison (Jane Eyre) and Rob Pomfret (Mr Rochester) to delve into the raw emotionality of the prose.

With little makeup as the plain Jane Eyre, Hannah Maddison is pitch perfect throughout in what is unbelievably her stage debut. She captures the hidden inner strength of Jane’s character and confessional quality of the book with all its hushed secrecy and horror. Rob Pomfret is also well cast as the brooding, misunderstood Mr Rochester, which he conveys with strong physicality and gruffness.

The Rosemary Branch Theatre have breathed new life into this emotionally challenging yet tried and tested adaption by stripping it back to basics. They also have a good selection of continental beer at the bar.