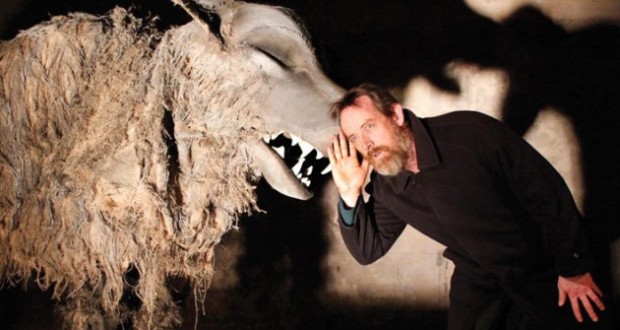 Pros: Haunting gypsy music; the sheer scale of the largest puppets was impressive.

Cons: The cast sometime stumbled over the show’s rhyming verse and the first half drags a bit.
Father Nandru and the Wolves, Wilton’s Music Hall – Review

Pros: Haunting gypsy music; the sheer scale of the largest puppets was impressive. Cons: The cast sometime stumbled over the show's rhyming verse and the first half drags a bit. Wilton's has surrounded Father Nandru and the Wolves with enticing tidbits: before the show you can grab a bit of ZakuskiLondon's Romanian-inspired finger foods, and afterwards there is live music in the bar by gypsy bands. On the night I was there the Transylvanian band had their families with them, including a small boy in a suit and trilby hat with an ornate heart pinned to one side. During&hellip;

Go for the wolves, stay for the goats.

Wilton’s has surrounded Father Nandru and the Wolves with enticing tidbits: before the show you can grab a bit of ZakuskiLondon’s Romanian-inspired finger foods, and afterwards there is live music in the bar by gypsy bands. On the night I was there the Transylvanian band had their families with them, including a small boy in a suit and trilby hat with an ornate heart pinned to one side. During the first song he did an energetic dance, jumping, stamping on the ground and slapping the sides of his boots, all the time somber-faced. That spontaneous moment of performance was a definite highlight of the evening.

The story of the piece concerns a small Transylvanian village that is disrupted from 500 years of staunch tradition when Eveline (Lori Hopkins), a villager’s daughter with a misshapen face, runs away with Vadim (Stewart Fraser), the crippled son of a local gypsy clan. The rather drunken local priest, Father Nandru (Jonathan Stone), manages to unite the village (apart from Eveline’s crusty father Mihail, played by Francis Wright) at their wedding. Meanwhile, Father Nandru is plagued by visions of giant wolves, a condition he always attributes to his hard drinking habits.

In the second half, it turns out that wolves and culturally challenging weddings are the least of Father Nandru’s problems, for the end of the world is coming. The Romanian Communist party introduces policies designed to promote modernity and efficiency, which basically boils down to destroying every traditional village and moving everybody into giant purpose-built apartment blocks. The villagers are sent their separate ways, but not before a daring feat of cultural preservation–with a little help from those wolves of Father Nandru’s.

Julian Garner wrote Father Nandru and the Wolves especially for Wilton’s, so the scale of the production fits the space like a glove. A mixture of puppetry, music, and conventional acting, there are some wondrous aspects of the performance. The wolf puppets are especially beguiling, as are the large-scale mechanic puppets representing the oppressive Ceausescu regime (excavators and giant bullhorns). There is an especially moving moment of shadow puppet projection where bulldozers push every aspect of traditional life, from the cottages down to the trees and birds and even the musical instruments, into a giant pit. Live gypsy and folk music provided by Csergo band from Transylvania brings a hauntingly beautiful quality to the show. My favourite part of all, though, is the goat puppets used during the mummer’s play. The mummer’s play is a pagan tradition designed to chase away winter and herald the start of spring. Their googly eyes and bright blankets are a lively, merry interlude in an otherwise sombre work. They definitely received the most energetic audience reaction of the evening.

One of the challenges of a play written and directed by the same person is that they sometimes lose the ability to step back and see which parts of their vision could use a good old cut. The first half is far too long; the person next to me left. (I was glad of this, as he’d clearly consumed several of the eggier dishes ZakuskiLondon had on offer before the show.) Several people in front of us failed to return after the interval, which was a shame as the best material is definitely in the second half.

All in all, a very enjoyable evening at Wilton’s, partly because of the play itself but largely for the delights surrounding it.