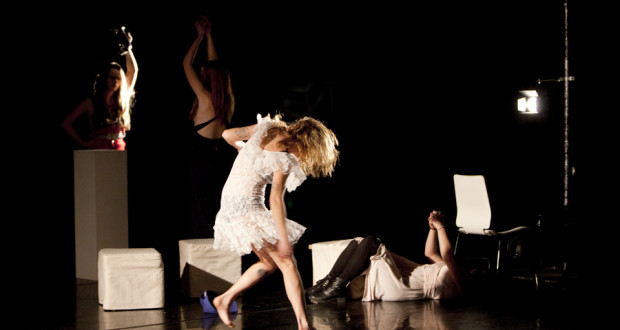 Pros: Halfway between performance art and opera. Cons: At times things got just plain confusing. “Cass was the youngest and most beautiful of five sisters. Cass was the most beautiful girl in town. Cass was fluid moving fire. She was like a spirit stuck into a form that would not hold her.” And so begins Opera Viscera’s imaginative retelling of Charles Bukowski’s short story The Most Beautiful Woman in Town. Opera Viscera describe themselves as a ‘collective of artists collaborating across different disciplines, leading to unusual and compelling theatre’. Unusual? Definitely! Compelling? Mostly. Rose Keys’ set design is highly suited to&hellip;

Sexy, irreverent, but not quite truthful.

User Rating: Be the first one !
“Cass was the youngest and most beautiful of five sisters. Cass was the most beautiful girl in town. Cass was fluid moving fire. She was like a spirit stuck into a form that would not hold her.” And so begins Opera Viscera’s imaginative retelling of Charles Bukowski’s short story The Most Beautiful Woman in Town. Opera Viscera describe themselves as a ‘collective of artists collaborating across different disciplines, leading to unusual and compelling theatre’. Unusual? Definitely! Compelling? Mostly.

Rose Keys’ set design is highly suited to the precarious and enticing character of Cass, who lures her lover and audience into her world. Props are basic but effective; a bed of dirt suggesting a grave, a rotten mattress suggesting sordid love affairs, and numerous scattered empty wine bottles suggesting the need for escapism. The entire aesthetic of the production is well thought-out and cleverly put together. Keys’ choice of costuming for Cass however troubled me. In his original story Bukowski described Cass as someone almost other worldly, with a devastating nature. So it was difficult for me to understand why she traverses the stage in ballet slippers and a pair of what appeared to be cycling shorts underneath a dress with embroidered flowers as these things suggest an air of innocence to me. For me this was not the best aesthetic reflection of the free spirit, who is capable of the most self-destructive act imaginable. Beneath the costuming however, Kitty Dalton very much looks the part of Cass; beautiful, free-spirited and suitably tattooed.

The performance is a self confessed hybrid of story telling and dance and perhaps this is why the physicality lacked conviction. Although not wholly a physical piece of theatre, more commitment is needed between the two lead roles in this area that could make the whole thing come together better. The choice to depict Cass as a careless yet graceful snake-like figure who constantly gyrates with her boyfriend and sneaks across the floor is a bold move but one that needs more rehearsing.

How close to the original text does Lia Ikkos, director and writer, stick to? The conversational dialogue was sometimes clunky at best. However, there is a lot that works here too. The direction is pretty much spot on. Ikkos’ offstage narration is also creepy and seductive – reminiscent of the narrator in 1927’s production of The Animal and Children Took to the Streets. It really helped the audience to make sense of what was often abstract and at times confusing. Andrew Gorman and Camilo Tirado’s original compositions advance the story and further develop Bukowski’s original ideas. Their onstage presence and live music is sexy, succinct and adds fuel to the fire. Joanne Evans and Antigone Ikkos harmonised beautifully throughout. Their complimentary shots of vodka for the audience were much appreciated and helped set the tone for the opera production, which in truth was more like the concert performance that the company describes it as. Very rock ‘n’ roll, with the added benefit of abstract screen projections.

The best thing about spending time in Cass’ world was being able to admire the collaborative spirit of everyone involved. This is the kind of attention grabber a lot of theatre companies need, so take note. Although not perfectly executed, the multitude of ideas and performance techniques are very interesting. Definitely one theatre company to watch out for.

As we normally note from our time down in the Waterloo Tunnels, the staff deserve a special mention for their excellent customer service.