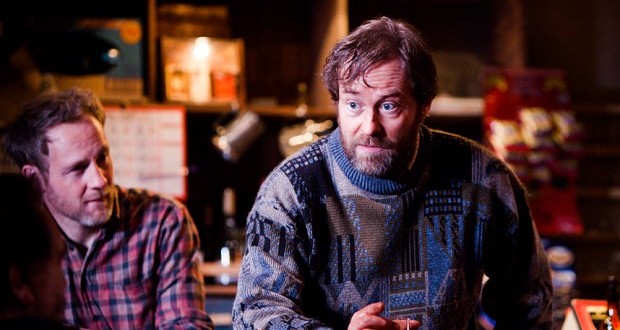 Pros: A clever and poignant script, some wonderful acting and a great design.

Cons: It would have been nice to see the characters more affected by the copious amounts of alcohol consumed, but this is a minor quibble.
The Weir, Wyndham’s Theatre – Review

Pros: A clever and poignant script, some wonderful acting and a great design. Cons: It would have been nice to see the characters more affected by the copious amounts of alcohol consumed, but this is a minor quibble. The Weir is the Donmar’s latest transfer into the West End. This production is a revival of the original, which ran at the Royal Court in 1997. Following a stint on Broadway, it was staged at the Donmar Warehouse in 2013, before beginning its tenure at the Wyndham’s Theatre this January. Despite it being critically acclaimed, I had personally not heard&hellip;

A very good piece of theatre which will satisfy your craving for good drama, but might leave you wanting a Guinness by the end of it.

The Weir is the Donmar’s latest transfer into the West End. This production is a revival of the original, which ran at the Royal Court in 1997. Following a stint on Broadway, it was staged at the Donmar Warehouse in 2013, before beginning its tenure at the Wyndham’s Theatre this January. Despite it being critically acclaimed, I had personally not heard that much about it. Given its track record however, I arrived at the venue expecting a very good show. And that is exactly what I got.

The Weir was written by Conor McPherson in 1997, and is set in a pub in rural Ireland. The cast consists of just five: Brendan (the landlord of the establishment), Jack, Jim and Finbar, (three locals and regulars of the bar), and Valerie (a young woman who has recently moved into the area). Finbar has been showing Valerie around, and brings her to the pub, where the local washouts jostle for her attention. The conversation turns to old folktales and strange happenings: old stories about fairies knocking on people’s windows and doors, a story about a young girl hallucinating, and a ghost tale about a dead man demanding a different grave. As it turns out, Valerie has an eerie (and heartbreaking) story of her own to share, which is perhaps more than the other patrons hard bargained for.

The script is very well polished, and McPherson’s skill as a writer is obvious. The dialogue is natural, and despite being set in a single room, one feels totally drawn into the action. The writing is clever, and without being too forceful, it weaves recurring motifs into the various tales recounted by the characters. At the end of the day, the play is about superstition, and how some human fears are innate and timeless.

The cast do a wonderful job of bringing this play to life. Brian Cox (not the professor) is truly the driving force of the show as Jack, the older garage-owner who is a regular at the pub. He is energetic and fun, and it is his larger-than-life character who really powers the action of the play. Peter McDonald as Brendan is also good fun: his surly portrayal of the barkeeper is cheeky and welcoming. Ardal O’Hanlon plays Jim, a mild-mannered handyman who lives with his mother. Jim is a man of few words, but O’Hanlon makes him a memorable character, who is at times quite funny, and at others very intense. Risteard Cooper plays Jim, a local businessman, who hits an interesting balance between slimy and generous. Finally, Dervla Kirwan plays Valerie, the woman who has recently moved into the area. Without giving too much away, Valerie has some pretty intense material to deliver in the play, but Kirwan takes on the role skilfully and tastefully.

Another highlight was the design of the show. Award-winning lighting designer Neil Austin is on top form, beautifully illuminating the pub, and making it feel cosy and warm. He uses a signature long fade to signify the transition from daytime to night outside, which is so realistic it took me by surprise. The set designer, Tom Scutt, furnishes the room to make it feel like the pubs you remember from your childhood – grotty but welcoming. Combined with the sound of howling wind outside, the design team do a great job to create the perfect atmosphere.

To sum up, although it wasn’t ground-breaking, this production was pretty much a textbook example of a production done right: clever script, excellent acting and direction, and wonderful production values. My only criticism would be that perhaps it could have been more visible that the characters get tipsy, given the copious amounts of booze consumed during the play. But this is a minor quibble. Overall this is a very good show, which, by the end of it, will leave you delightfully satiated theatre-wise… Although it will probably also put you in the mood for a Guinness.

Previous: Fear and Loathing in Las Vegas, The Vaults – Review
Next: I Love You Because, Theatro Technis – Review