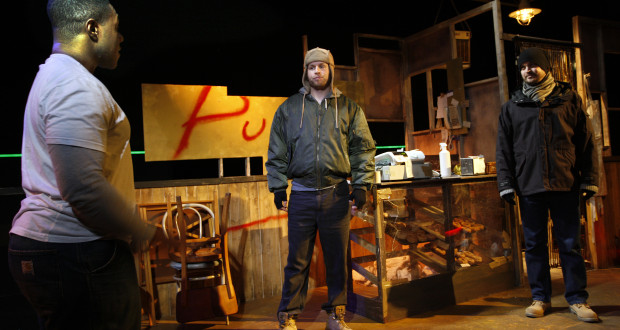 Pros: The relationship between the two main characters, Franco and Arthur, is reminiscent of the bond between young Thao and Walt in Gran Torino.

Cons: The moments when Mullen engages the audience, opening up about Arthur’s past, seemed a little disconnected from the flow of the play.
Superior Donuts, Southwark Playhouse – Review

Pros: The relationship between the two main characters, Franco and Arthur, is reminiscent of the bond between young Thao and Walt in Gran Torino. Cons: The moments when Mullen engages the audience, opening up about Arthur's past, seemed a little disconnected from the flow of the play. Superior Donuts is a naturalistic urban drama set in a donut shop of the same name in Manhattan, New York. This unassuming shop becomes the setting in which the lives of two characters come together; and we witness the storms they need to wither to find a measure of happiness. The Southwark&hellip;

An urban drama that brilliantly portrays the complexities and greatness of everyday life stories. There could be an Arthur and Franco behind the counter of any donut shop.

Superior Donuts is a naturalistic urban drama set in a donut shop of the same name in Manhattan, New York. This unassuming shop becomes the setting in which the lives of two characters come together; and we witness the storms they need to wither to find a measure of happiness.

The Southwark Playhouse in South London is the perfect bohemian theatre: bricks, wooden tables and candlelight. A busy atmosphere suffused with the opinions and everyday routines of critics, theatre students and audience members. A space like many others, bringing people together to watch Tracy Letts’ Superior Donuts. There’s a reason I describe the theatre in this way: the play explores the unexpected symbiosis that can occur in the most unexpected of places, be it a theatre or a donut shop.

We are led into the theatre through a side door. In order to get to our seats, we have to walk around the stage space through the murky kitchen of a small establishment – which will be hidden from view by a beaded curtain – leading into the main area; the front of the shop. There is rubbish scattered everywhere, the display window is smashed, the word ‘pussy’ is scrawled across the wall in bright red letters, and there are no donuts to be seen. We are welcomed into the aftermath of a robbery.

Moments later, Max (Nick Cavaliere), the Russian owner of the DVD store next door, and Officers Randy and James (Sarah Ball and Alexander James Simon) are discussing the possible suspects of the break in. It’s not until a few minutes later that owner Arthur (Mitchell Mullen) walks in, utterly absorbed in his thoughts and uninterested in the fact that his shop has been ransacked. He decides to close for the day, having forgotten about the employment ad he put on his door after losing his assistant. As he smokes a fag, engaging the audience directly with facts about his childhood and early life, Franco (Jonathan Livingstone), a young student of twenty-one with a rather shady past, walks in, breaking Arthur’s stream of consciousness. Franco blows Arthur away with an energetic and can-do attitude for the shop, and is offered the job immediately.

The two come together in a relationship not unsimilar to the one forged between Bee Vang and Clint Eastwood in Gran Torino: the unreadable older figure develops a bond with the younger and full-of-life character which allows him a closeness he never thought possible. It is the sparkling chemistry between Livingstone and Mullen and their out-of-this-world that elevates the play to an unexpected level. The donut shop helps Arthur steal moments from Officer Randy when she comes in for coffee, and allows Franco to dream of greatness and success as a writer. It is in the shop that Mullen progressively opens up his character to the possibility of love and life, inspired by Livingstone’s positivity and energy, which filters through his role and reaches all of us watching.

Even though we only see moments shared by the characters inside the shop, the writer successfully condenses and unfolds entire lives inside the little walls of Superior Donuts. It is extraordinary to see these unassuming characters become heroes by the heart-breaking end. But more than that, it also elevates everyone watching to be the hero of their own stories. And if that’s not enough for you, donuts can be bought in the interval!