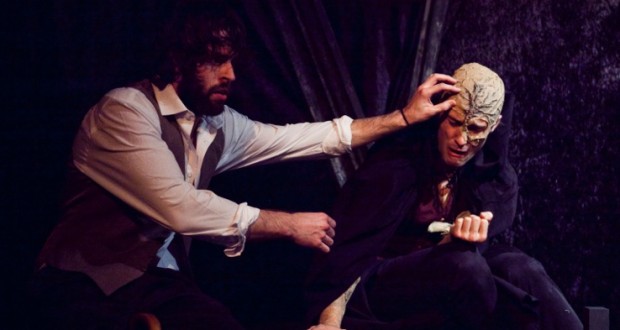 Cons: As the novel is such a beast, this production tries to cram far too much into two hours. With clever direction, less could be so much more.
Frankenstein: The Modern Prometheus, Lion and Unicorn Theatre – Review

Pros: A strong ensemble cast, supported by great sound effects and unique lighting, tackle Mary Shelly’s infamous tale of horror and love at the stunning Lion and Unicorn Theatre. Cons: As the novel is such a beast, this production tries to cram far too much into two hours. With clever direction, less could be so much more. One of my favourite things about living in London is that - despite living here for the past 16 years - I am still discovering theatre venues that I’ve never heard of. Step forward the wonderful Lion and Unicorn Theatre in the&hellip;

An extremely ambitious and creative production which doesn’t quite hit the spot. Some great horror moments and even better dramatic scenes, but unfortunately these are few and far between.

One of my favourite things about living in London is that – despite living here for the past 16 years – I am still discovering theatre venues that I’ve never heard of. Step forward the wonderful Lion and Unicorn Theatre in the heart of Kentish Town. Now in its 25th year, this theatre is the cultural lifeblood of this leafy North London suburb. Needless to say, the quaint pub the theatre is attached to, with its wonderful atmosphere and friendly staff, also caught my attention. The bar snacks, and my large glass of Tempranillo, were a welcome relief after a long day of staring at my computer screen.

Frankenstein: The Modern Prometheus is the first part of the theatre’s exciting gothic trilogy, which is running until Autumn 2014. Seeing Benedict Cumberbatch and Jonny Lee Miler in the National Theatre’s production 3 years ago is still one of my all-time favourite theatrical experiences, so my expectations were high as I took my seat.

The set by Cory Roberts makes great use of the small and dark space, and the unique use of sporadically placed, dimly lit light bulbs is a wonderful touch from Ciaran Cunningham. The sound effects throughout the show, from the lightning bolts to the distant screams of murder victims, really set the mood superbly, and I felt like I was a part of the show at times.

No matter which way you look at it, trying to take on the beast (pardon the pun!) that is Mary Shelly’s epic Frankenstein is something to be admired, and I take my hat off to the creative team, who should be commended for taking on such an ambitious task. Where the production is sadly quite weak is its fluidity and pace – or lack thereof. The actors are on and off the stage quicker than a local villager running away from the creature at first sight, and no one scene is longer than 60 or 90 seconds. These relentless scene changes made me feel like I was constantly trying to keep up with who’s who and what’s what. I felt some scenes could’ve been amalgamated into one longer scene at times, which would have helped set the narrative and flow a bit better. Like I said earlier the novel is a beast to dissect and I felt the director was trying to cram far too much into a series of short scenes which resulted in the audience not being able to connect with any one character.

Dmitry Ser gave a solid performance as the lead, however I did find his tormented Victor a bit wet behind the ears at times. Sam Curry as the creature, with his funky light blue pants, was incredible. Through Sam’s strong performance you couldn’t help but ogle, quite literally, at the beauty of the patchwork man. I thought the touching scene where the creature sees his reflection in the water was executed beautifully by both Sam and the director. The supporting ensemble cast were all superb, with special shout outs to the rather dapper Richard Rowden and the great comic timing of both George Vafakis and Rory Fairbairn. The gorgeous Sophie Tanza, aka Natalie Portman’s twin sister, also gave a strong and believable performance as the tormented Elizabeth.

This production has its moments, but as someone who loves the genres of both horror and drama, I felt I wanted more.