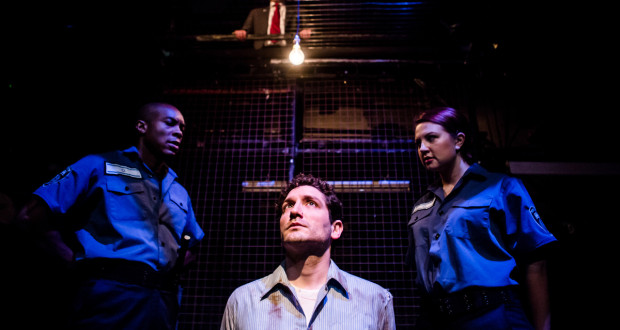 Cons: The play is highly ambitious, covering so many themes in only two hours. Sometimes it goes slightly too fast, and much is left unexamined.
The Keepers of Infinite Space, Park Theatre – Review

Pros: Deft writing, powerful acting and a fantastic set combine to make this production brilliantly compelling. Cons: The play is highly ambitious, covering so many themes in only two hours. Sometimes it goes slightly too fast, and much is left unexamined. Vitriolic simplicity is the chief pitfall of many a polemical play. So keen to extol some virtue or condemn some excess, playwrights often stray towards black and white portrayals of complex beasts. The conflict between Israel and Palestine is a case in point. It demands nuance and subtly, but more often than not it gets neither, only battle&hellip;

A play full of pathos, rage and loss; riveting to watch. If you want something both cerebral and dramatic with some polemic thrown in too, go and see it.

Vitriolic simplicity is the chief pitfall of many a polemical play. So keen to extol some virtue or condemn some excess, playwrights often stray towards black and white portrayals of complex beasts. The conflict between Israel and Palestine is a case in point. It demands nuance and subtly, but more often than not it gets neither, only battle cries and outrage.

I approached The Keepers of Infinite Space with some trepidation then. It promised to be a resolutely political play – a scathing examination of the “fraught legacy” of Israeli prisons. And it did just this. But it also refused to simplify the complexities of prison life.

This is not a tale of monstrous prison guards and brave incarcerated freedom fighters. Instead the incisive writing of Omar El-Khairy lays before us a panoply of flawed characters: an idealistic but ineffectual left-wing journalist, a human rights worker who has forsaken the humdrum boredom of Slough for Palestine, and an Ethiopian guard who is being torn from within by the violent and brutal demands of his job.

The prisoners themselves are treated with the deftest of touches. At once both brave and foolish, they are caught up within a game of masculinity and male bravado. Courage is fetishised most of all by these men, but El-Khairy shows bravery to be highly destructive. Husbandless wives populate the visiting room of the prison, and tales of dead brothers and torn families pepper the speech of each and every prisoner.

It is remarkable that such vast and intimate themes are explored so fully from the confines of one prison. I think the superb set makes this possible. Austere design, and clever use of partitions and lighting allow the stage to seem both infinitely vast and claustrophobically small. Space, as the title of the play suggests, is at the very crux of this play. It lies at the heart of the conflict between Israel and Palestine and its lack defines the sordid existence of the prisoners.

If anything, this production is too ambitious. It unravels so many themes of such staggering complexity that many cannot be fully explored. And yet it would be churlish to hold the play to account on its overly zealous ambition. It offers so much for thought, and it makes very real the suffering and torment of many Palestinians and Israelis alike.

Of course some fantastic acting has much to do with this. Patrick Toomey as a veteran inmate is both menacing and affable in equal measure, and Phillip Correia plays the young incarcerated Shadi with all the subtly that such a sad and yet comic character demands. But perhaps it is Cornelius Macarthy who turns in the star performance with his portrayal of a tormented prison guard being undone by an unjust and immoral institution.

The Keepers of Infinite Space is a demanding play. Often it is not easy watching – scenes of violence and terror are common. But it is necessary and bold political theatre, and it will have you thinking for days.