Home » Features and Interviews » The Factory: changing the rules of theatre? 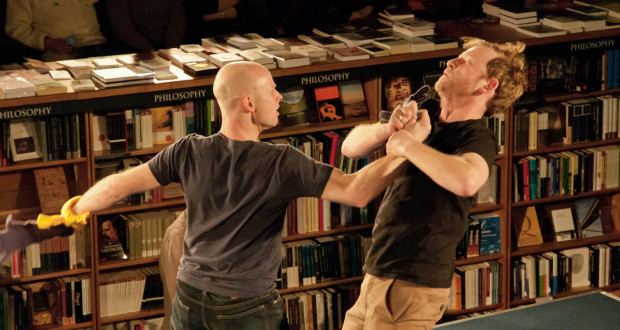 The Factory's Odyssey as performed in Blackwell's Bookshop in Oxford. Credit: Judie Waldmann

The Factory: changing the rules of theatre?

Emma Shone speaks to Tim Carroll, the director behind the all-male version of Twelfth Night starring Mark Rylance and Stephen Fry, about his latest project at the helm of The Factory’s Odyssey.

We all know the drill. You walk in, sit down, and look on as a group of actors dressed to the nines reel off a pre-prepared cascade of script. Genres vary, of course: the same actors could have you sobbing into your program or laughing uncontrollably depending on the words and actions they’ve prepared for you. This is theatre.

But what if someone changed the rules? What if the actors weren’t in costumes at all or didn’t have a script to regurgitate night upon night? What if you weren’t even sitting down, but instead found yourself hauled up onto the stage to interview characters or be used as a human puppet?

This is precisely what a joint venture between The Factory and Creation Theatre has brought to the table. Under the direction of Tim Carroll, the brains behind the candle lit all-male Twelfth Night which made it all the way to Broadway, a small group of actors are spending this week and next tucked away in the CLF Arts Café, Peckham. They are performing Homer’s The Odyssey in such a way that no performance can ever be the same.

What if someone changed the rules? What if the actors weren’t in costumes at all or didn’t have a script to regurgitate night upon night?

Armed with just a few songs and personal monologues, the cast throw themselves into the story of the production and improvise its telling throughout the night. As with The Factory’s production of Hamlet, there is one constant. Previously, they used Shakespeare’s text as their guide; in The Odyssey it is the poem’s 24 books that regulate the telling of the tale. While the improvised relaying of iconic literature may seem a big task to place on the head of any actor, director Tim Carroll has little concern over the production taking a wrong turn: “I wouldn’t say I worry very much. It’s only an evening with some people. Some parties are better than others. I get cross if I think people are showing off or splitting, but then who doesn’t?” While some aspects of improvised performance are harder than others, he told me, “Improvisation always has rules, and if one could learn enough skills and play by the right rules, you could improvise anything.”

Improvisation always has rules, and if one could learn enough skills and play by the right rules, you could improvise anything.

By throwing ‘conventional’ theatre out the window and reverting to traditional storytelling techniques, The Factory create an atmosphere which is both familiar and unfamiliar at the same time. Carroll describes his work with the company as an “attempt to shake ourselves awake”. “My vision”, he says, “is just about making things happen that we don’t see coming. My vision is an attempt to blindfold myself and the actors. I do it by getting them to do whatever comes into my head. Meaningless instructions mindlessly followed.” And just like that, I found myself mindlessly following the directions of a cast member as he puppeted me across the stage.

Without the barrier of a script, The Factory have created a more intensely personal experience, with the cast sharing both their own stories and memories, but also those of the audience. This doesn’t necessarily deem it better or worse than any other performance style; it just is what it is. Conforming to any sort of genre or practise would, in fact, be miles away from Carroll’s intentional lack of intention: “I don’t think theatre fails ever except by being boring. Storytelling theatre can just as easily be boring. I don’t care about distinctions or categories; I just want each moment to feel that here, in this space with these people, is the place to be.”

I just want each moment to feel that here, in this space with these people, is the place to be.

The cast take it in turns to play the eponymous Odysseus, distinguishing his presence with a scarf and bobble hat borrowed from extremely willing audience members. Somehow, the rapidly changing casting had little bearing on the performance; it was liberating, in a way, to escape the confines of seeing a character through a single portrayal. In fact, the characters are not “seen” at all, but rather experienced from a multitude of angles. You feel them guiding you across the stage, you hear them sing and perform as though in a radio play. What Carroll has created with The Factory is not so much a play, but a multisensory theatrical experience: “I’d like to capture those bits of magic that are floating around in the air but which we are too busy to see or hear most of the time.”

I’d like to capture those bits of magic that are floating around in the air but which we are too busy to see or hear most of the time.

Theatre is a world filled with traditions on a broad spectrum of rich to completely wacky, and if truth be told it’s near impossible to know exactly what you expect when you sit down in that darkened room, waiting for the lights to go up. The beauty of improvised performances such as The Factory’s Odyssey is that there is no chance of you having even an inkling of what to expect. The level of improvisation involved means that the actors don’t so much perform to as share with their audience; it’s communication rather than dictation. It’s a new breed of theatre that could be anything and everything all at once or not at all, and it takes on a whole life of its own. While it may not be every theatre goer’s cup of tea, The Factory’s work does beg the question: if you have the right actors and the right story to tell, do you really need a script, or is the liberty of improvisation a more effective way of reaching into the soul of an audience? Storytelling is one of the oldest performance traditions, and The Odyssey gives you just a glance into its possibilities. As the director himself told me: “you feel that the past is almost in touching distance and that there is something incredibly exciting about making a leap towards it.”