Home » Features and Interviews » Once performs a Spotify session – Sponsored 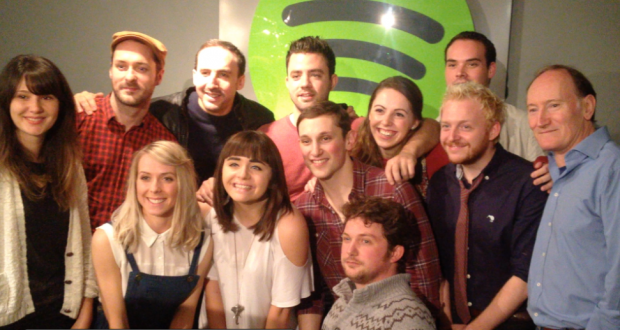 Once performs a Spotify session – Sponsored

Author: Everything Theatre in Features and Interviews 11 January 2014 0 381 Views

Once has become the first musical to perform a Spotify session.

Based on the much-loved Oscar-winning film, Once is an extraordinary and irresistibly joyous celebration of love, friendship and music. This made it the perfect choice for a Spotify live recording session last November.

Once tells the story of an Irish busker and a Czech girl who meet through a shared love of music. Their songwriting sparks a deep connection and a romance that neither of them could have expected. Winner of 8 Tony Awards in 2012, including Best New Musical, and a 2013 Grammy Award, the unique stage adaptation takes you right to the heart of the action in a rapturous production.

Once has now become the world’s first theatrical production to be invited to record an exclusive live session at the Spotify London offices. Producing a heart-warming insight into the story the cast gave a glimpse of the magic that the show produces.

You can watch the entire 4 song exclusive Spotify session performed by the Once cast in the video below:

The cast performed pre-show tracks The Chandler’s Wife and Raglan Road as well as Gold and Falling Slowly. Listen to the session here: http://bit.ly/oncespotify.

Once the Musical Slider Sponsored Posts 2014-01-11
+Everything Theatre

Tagged with: Once the Musical Slider Sponsored Posts