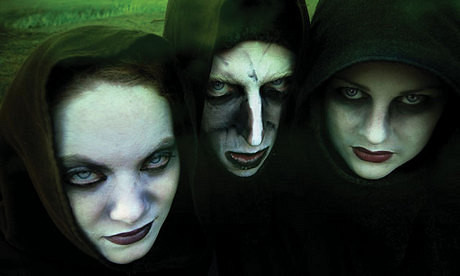 Pros: Great set and lighting design, a fun production. Cons: The mix of Shakespearean and modern text felt clunky. Musical numbers placed in strange moments. Aimed at upper primary and secondary school audiences, Shakespeare 4 Kidz present a modern, musical interpretation of the iconic Scottish tragedy. As a director who regularly stages Shakespeare, I am very aware of the struggle to make classic text relevant, fresh and accessible. I’m also painfully conscious of how important it is for young audiences’ first encounter with the Bard to be a positive one. I developed a passion for Shakespeare despite my education&hellip;

A valiant attempt at making Shakespeare engaging for a young audience, though teenagers are more savvy audience members than this production gives them credit for.

Aimed at upper primary and secondary school audiences, Shakespeare 4 Kidz present a modern, musical interpretation of the iconic Scottish tragedy. As a director who regularly stages Shakespeare, I am very aware of the struggle to make classic text relevant, fresh and accessible. I’m also painfully conscious of how important it is for young audiences’ first encounter with the Bard to be a positive one. I developed a passion for Shakespeare despite my education and a string of disinterested teachers so I was looking forward to seeing how this touring company would tackle a fundamental part of English literature and theatrical history.

The audience, several school groups strong, entered the auditorium to be greeted with the eerie set, designed by Kate Unwin (also responsible for the costumes in this production). The set is left plain in order to accommodate the changing locations of the play and the cast use the space well. The use of levels in the set design is a nice element, which is employed skilfully at key moments.

The play opens with the Three Witches, and Jane Kahler, Leyla Holly and Richard Foster-King show off some good physicality and a punchy musical number. This was an engaging start to the show and a good way to introduce the young audience to the classical text.

The lighting design, by Dan Creasey, is bold and colourful. There are some nice asides, which are accentuated by contrasting lighting states – a clever way to explain the idea to kids that Macbeth cannot be overheard by other characters a few feet away while he soliloquises about treason.

The incorporation of music, while an exciting idea for a young audience, fell short of expectations. Songs appeared in the strangest of moments – the most jarring of which was when Lady Macbeth sung “out damned spot!” The performances were geared towards comedy in unusual moments, rather than giving focus to the horror or the moral consequences of murder. I do feel that this should have been addressed with more gravity. Several important punches were pulled in the favour of quick laughs or silly moments, notably when Lady Macbeth smears her husband’s head with Duncan’s blood.

The script, by director Julian Chenery, begins by adhering to Shakespeare’s writing, but soon deviates to incorporate modern vocabulary, and then to paraphrasing. The style of translation read like a plain English interpretation of each line of the original, but lacked any sort of fluidity between the thoughts. A modern overhaul of the text is a good idea if you want to give a classic story a more accessible edge for the audience, but the script should exist as a whole. This was lacking the more the play continued, for two and a half hours.

Key soliloquies were sacrificed in favour of modern language. Though well staged using the witches, Macbeth’s dagger speech was trimmed and skirted around. Using more of the language could prove helpful in allowing the kidz to connect the words with their emotional implications. A live performance of a school text is a precious study-aid. However there were moments where I struggled to see this production’s merit in a classroom.

At curtain call the applause was warm – maybe I’m just not close enough to the target audience. I felt like Shakespeare 4 Kidz missed an opportunity to offer those who have probably never seen live Shakespearean performance a unique experience. There are some good ideas and some delightful design elements but overall it just didn’t convince this reviewer.

Macbeth tours the UK and abroad after closing at The Ashcroft.