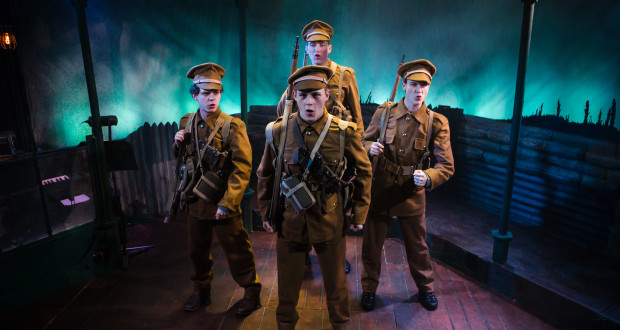 Cons: I felt like I’d seen it before. Although the storyline is original, the musical element of it is not.
Lost Boy, Finborough Theatre – Review

Pros: Hugely impressive all round. Great performances, great songs, great design and an original and clever storyline. Cons: I felt like I’d seen it before. Although the storyline is original, the musical element of it is not. Huge news: the pub is re-opening at the Finborough Theatre. I know I’m a bit behind the times here, but this discovery has set my 2014 off to a flying start. Another thing that has helped create my sense of New Year optimism is this world premiere of Phil Willmott’s new musical, Lost Boy. If it is anything to go by, then&hellip;

A truly brilliant world premiere of this powerful musical, but don’t be surprised if you find yourselves having a few déjà vu moments.

Huge news: the pub is re-opening at the Finborough Theatre. I know I’m a bit behind the times here, but this discovery has set my 2014 off to a flying start. Another thing that has helped create my sense of New Year optimism is this world premiere of Phil Willmott’s new musical, Lost Boy. If it is anything to go by, then we can expect a tremendous year ahead for the London theatre scene.

I’m always a tad concerned by new musicals; they are a big risk because there is so much to them. The storyline, the music, the lyrics, the acting, the dancing, the singing… If one element is out then it wrecks the whole thing. On this occasion however, I’m pleased to report a rather spectacular triumph for Willmott & co.

The musical is part of the Finborough’s TheGreatWar100 series to commemorate the centenary of the horrors that took place all those years ago. It brings together the characters – now adults – from JM Barrie’s Peter Pan on the eve of the war. The only one who has not grown up is Peter himself, and the story focusses on him as he learns to face the realities of adulthood. Ultimately, it’s a multi-faceted look at many things, but to me it served as a chilling reminder that no amount of growing up could have prepared those brave young men and women for the horrors of the First World War.

The production itself is mightily impressive in pretty much every aspect. As we’ve come to expect from the Finborough the set, designed by Philip Lindley, was superb. It’s amazing what they can do with such a small stage. Miguel Vicente’s lighting design was also noticeably excellent, at times complementing the show tunes, and at times serving to heighten the intense emotion and fear being expressed on stage. The only slight quibble I had was over some rather questionable use of the spotlight, which seemed a tad clumsy and distracting in places.

There were also some excellent song and dance numbers; my particular favourites were the more light-hearted Michael’s Song and Jungian Dream Analysis. There were a couple of songs in the first act that I felt dragged a little, but this is a minor quibble, especially given that the running time of 2hrs 15mins (including an interval) is very manageable.

The real brilliance of this show however was in the successful execution of the so-called ‘triple threat’ of acting, singing and dancing by a truly talented cast. The dancing in particular was brilliant, but the whole thing really was of West End standard throughout. Particular mentions must go to the brilliant Joseph Taylor, who demonstrated true versatility and mastery of all three disciplines. Also excellent were Joanna Woodward as an adult Tinkerbell, Steven Butler as Peter Pan and Grace Gardner as Wendy. That being said there were no weak links here; it was really a pleasure to watch.

My only gripe was that at times I felt I had seen it all before. Although the storyline is original, the musical element is less so; at times I was reminded of Les Miserables, at others Jesus Christ Superstar. That doesn’t change the fact that it was truly excellent of its own accord, but it just gave me one too many a déjà vu.

Overall though, this is a brilliant musical and one that – for so many reasons – I highly encourage you all to see, either at the Finborough or at the Charing Cross Theatre when it transfers there later this month. A tremendous start to 2014!