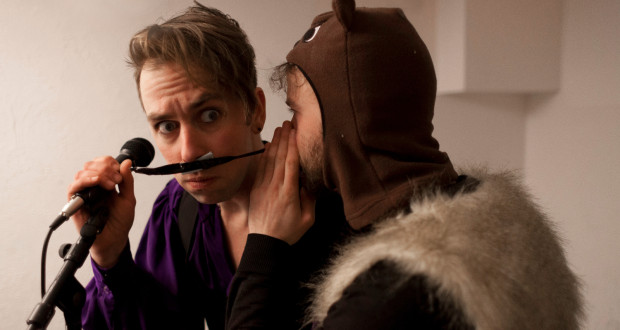 Cons: Its randomness might not be everyone’s cup of tea, especially if you’re expecting a faithful telling of the Don Quixote story.
Don Quijote, Camden People’s Theatre – Review

Pros: Irreverent humour, imaginative staging, and a real avant-garde production. Cons: Its randomness might not be everyone’s cup of tea, especially if you’re expecting a faithful telling of the Don Quixote story.   I had a teacher who once admitted to waking up in the middle of the night, driving to the M3, and then going from Junction 8 to Junction 9 the wrong way… just because he wanted to know what it felt like. Sensible? No. Responsible? No. Teacher-like? No. Quijotic? Yes. Often considered to be one of the first modern novels, Don Quijote tells the story of an&hellip;

A visual feast of excitement and eccentricity: rough round the edges but on the whole it worked well and was totally in keeping with its subject matter.

I had a teacher who once admitted to waking up in the middle of the night, driving to the M3, and then going from Junction 8 to Junction 9 the wrong way… just because he wanted to know what it felt like. Sensible? No. Responsible? No. Teacher-like? No. Quijotic? Yes.

Often considered to be one of the first modern novels, Don Quijote tells the story of an old man who wants to reintroduce the medieval notions of chivalry and valour by dressing up as a knight and going on various missions. The problem is, the people he encounters think he’s bonkers, and frequently end up beating him up. But Don Quijote is undeterred and, with admirable dedication, continues his quest. So, rather than give an accurate account of this 400-year-old 1000-page story, tonight’s “play” (if you can call it that) instead looked at what it’s like to be Quijotic in the modern age.

To start with, we were ushered down to a basement room of the Camden People’s Theatre. We were asked to leave our coats and belongings in a corner and then sit on red cushions in the middle of the floor. Now, I have quite a serious condition, known in the medical profession as “Fat Thigh Syndrome”. It basically means I can’t cross my legs. Although the cushion was a welcome sight, I really wasn’t looking forward to spending an hour on the floor, with my knees in my chin. Luckily, the action, we were told, was to take place all around us, meaning we had to – and were encouraged to – keep swivelling in order to catch it all. I could fidget and wriggle and switch buttocks to my heart’s content.

Everything about the tale of Don Quijote is ramshackle: his lack of any real plan, his makeshift equipment, the fact that things often go wrong. The play mirrored this, but in a good way. It started with a very odd free-flowing shadow puppet show, using imaginative props such as action figures twirling on vinyl decks, and windmills with sails made from combs. The two architects – and main performers – of this production, Keir Cooper and Tom Frankland, had clearly watched a lot of Blue Peter as kids, judging by their arts and crafts skills (though thankfully they hadn’t picked up the presenting abilities and general personality of Anthea Turner). Did the shadow thing work? Not really, but it didn’t particularly matter. It was whacky and humorous enough to keep most people tittering.

The rest of the show followed in a similar eccentric vein: an actress playing Don Quijote appeared, had the audience help her build her armour (including someone’s bike helmet from the clothing corner), then whisked one audience member away for pretty much the entire performance – god knows what they got up to. Then there was a Skype conversation with another performer, a man in a monkey suit and various other visual stunts that were equally mad and engaging. It would be interesting to see quite how much of it was improvised, as it felt like the cast were just trying things out and seeing what would happen.

But it wasn’t a complete mess. At times, it almost felt like a lecture (but one given by Ozzy Osborne). From a background to Don Quijote, detailing the author Cervantes’ own attitude to the book, to examples of people the cast thought were modern-day ‘Dons’, the production had a clear path along which the audience could follow (even though, like the book, it didn’t really go anywhere). In effect, it was a celebration of doing things your own way, without caring what anyone else thinks. This, I felt, was summed up during the frenzied finale, when one of the performers took his top off, to reveal a Blue Peter tattoo on his arm. That’s dedication. Anthea Turner would be proud.