You can use WP menu builder to build menus
Home » Reviews » Drama » The Shape of Things, Arcola Theatre – Review

Cons: Not the most exciting play, and the subject matter felt a bit dated.

Our Verdict: A safe and solid production with a good narrative arc, but which failed to build up to an satisfying finish. 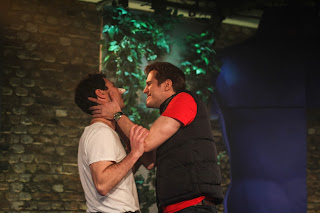 At school, we used to have to go to church every week. One time, after singing a particularly inane hymn, I slumped back down onto the pew. But instead of experiencing the cold chill of smooth pine, my posterior met with a rather more uncomfortable trespasser: a large, solidly-binded, upright prayerbook. As Rio Ferdinand might say, I’d been well and truly mercked.

Normally I’d laugh off schoolboy pranks. This is from someone who skived a whole day of lessons by claiming I had jury service. When I was seventeen. But I couldn’t forgive this one. Mainly due to the slight discomfort I now still feel when sitting in a hard place for any decent length of time. So imagine my dismay when I turned up at Arcola Theatre for tonight’s performance of The Shape of Things, to be told it’s a 90 minute performance with no interval. Oh, and then seeing rows and rows of rock-hard wooden benches… I’m in for a long night, I thought, frantically scrunching up my Evening Standard into little bottom-relieving balls.

The play itself was set in the US, on a university campus. It depicts the blossoming relationship of Adam, a dorky student, and Evelyn, a racey artist, as well as their interaction with Adam’s jock former roommate Phil and his awkward fiancée Jenny. Adam can’t believe he’s bagged such a stunner, but soon grows into his role as Evelyn’s much-doting boyfriend. Has anyone seen the trashy American reality TV show called Beauty and the Geek? Me neither. Ahem. But it starts off a bit like that. Apparently.

The play also spent a fair bit of time discussing the merits of art. This was evident from the imposing set, consisting of a gigantic blue male torso that dominated the stage. Initially a bona fide art installation, it was then broken up by the actors and transformed into various bits of furniture in other scenes. If only this bench would transform into a jacuzzi, I thought, as I wriggled on top of David Cameron’s newspaper face.

Joking aside, the production did hold my attention pretty well. The acting – in particular Sean McConaghy as Adam – was for the most part very impressive. The story was clear, dappled with humour, and progressed nicely. Certain lines or topics would echo through the scenes, giving meaningful resonance to the dialogue. There was also a healthy dose of intense moments, during which the actors could truly act – tears, anger, warmth etc – something I find is all too lacking in a lot of plays I’ve seen recently.

I suppose my main gripe was the central question it raised: what is art? This has been asked so many times down the years, that it’s getting a bit dull and predictable. Granted, the play was written in 2001, but even then I’d have imagined the question to be a bit passé.

For a play about art, it was a very straight storyline, without any real flair or ingenuity. And I feel the denouement epitomised this – it appeared fairly abruptly without there being a proper crescendo leading up to it. In short, it all felt a little bit sign-posty and lacked an organic finish. It’s no wonder then, that this was the point when I was at my most fidgety.

All in all, it was a fairly enjoyable evening with good characters and a story that held my attention (pretty much) til the end. It takes a bold theatre to make their seats quite so uncomfortable – they have to have a lot of confidence that their work will captivate their audiences enough to render all other sensations numb. Here, it was a fine line, but Arcola just about managed to avoid any pitfalls – which is more than could be said for my poor behind, all those years ago.

The Shape of Things runs at Arcola Theatre until 21st December 2013.
Box Office: 020 7503 1646 or book online at http://www.arcolatheatre.com/tickets-for/arcola/the-shape-of-things