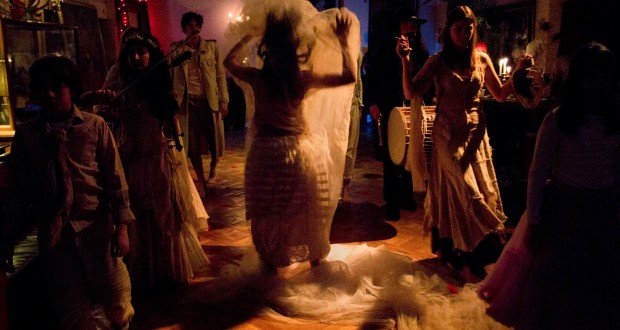 Pros: The atmospheric setting and costuming will make you feel like you’ve wandered into a different world.

Pros: The atmospheric setting and costuming will make you feel like you’ve wandered into a different world. Cons: The performers’ movements become monotonous. The musicians are upstaged by their background recording. Seeing a site-specific show is always a bit of an adventure. First, there’s the challenge of getting to the location. Directionally challenged as I am, this can sometimes be rather off-putting, especially when you end up at least two buses away from a decent Wi-Fi signal. Then the venue and amenities also vary. Sometimes you end up standing around in a field desperately wishing you’d put on that&hellip;

The performance unfortunately relies heavily on two aspects that could do with improvement. The visuals are stunning but can’t quite make up for the rest. Interesting collaboration with lots of potential though.

User Rating: Be the first one !
Seeing a site-specific show is always a bit of an adventure. First, there’s the challenge of getting to the location. Directionally challenged as I am, this can sometimes be rather off-putting, especially when you end up at least two buses away from a decent Wi-Fi signal. Then the venue and amenities also vary. Sometimes you end up standing around in a field desperately wishing you’d put on that extra jumper, or that you hadn’t had that cup of tea just before you left. Fortunately Old Cholmeley Boys’ Club is a very manageable five minutes walk from Dalston Overground station. It also turns out to be warm, and furnished with toilets as well as plenty of chairs. In short, it’s site-specific theatre that’s also suitable for those of us who don’t like to suffer for art.

The show itself is a first time collaboration between world music duo Daemonia Nymphe and the experimental Theatre Lab Company. Based on Daemonia’s new CD, Psychostasia is an atmospheric performance inspired by several ancient Greek myths, like the story of Orpheus and Eurydice. Orpheus is a famous and talented musician. When his wife Eurydice dies, he travels to the Underworld to try and win her back.

Orpheus and Eurydice’s story was one of the few recognisable storylines. Other myths are hinted at or symbolised rather than actually played out. In itself this can be a very effective method of storytelling, especially in a performance that relies as heavily on music as this one does. Unfortunately I didn’t find enough diversity throughout the show to be able to distinguish between one myth and the other. There’s quite a lot of repetitiveness in the performers’ moves and poses. Even though they are obviously skilled psychical actors, and move very gracefully across the space, I couldn’t stop my attention from wandering.

Music plays probably the most important part in the performance as a whole. Daemonia Nymphe has a unique brand of Greek-inspired folk music. Mostly playful and floaty, the acoustic songs are beautifully fragile. For the better part of the show unfortunately, the musicians were not so much backed rather than drowned out by a studio recording. I understand that the costs and efforts involved in getting a big enough band to play everything live eliminate that option for everyone who’s not the National Theatre. This alternative however, didn’t do justice to either the music or the musicians, since it also had the strange side effect of making it seem like you’re watching people play backing.

All of that being said, to me these look like ‘finding your feet’ issues. First time partnerships are about finding new ways of working together, and there’s definitely a lot of potential for growth here. The space and the costumes complement each other well, making the performers truly part of their surroundings. With the strong visuals, the music and the sounds and smell of the fireplace, at its best this show feels like a strange dream where a Venetian ball meets pagan rituals. In fact I found it to be quite reminiscent of Punchdrunk’s The Drowned Man, which achieved the same effect with probably fifty times the budget. If only I had that kind of money lying around, because I would very much love to see what Daemonia Nymphe and Theatre Lab Company would do with it.