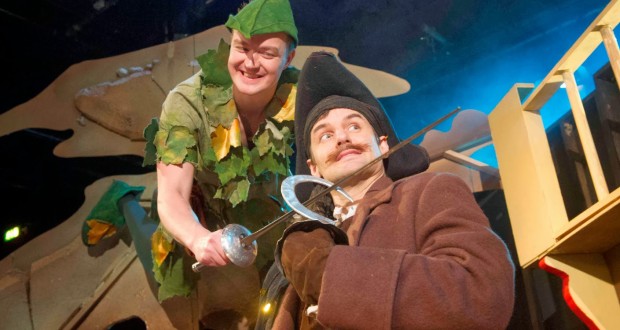 Pros: Hilarious. A perfect cheer up on a winter’s eve.

Pros: Hilarious. A perfect cheer up on a winter’s eve. Cons: Sometimes humour strayed into simplistic territory. A few months ago I heard a story on the podcast This American Life about a real production of Peter Pan at an American college that went disastrously wrong. The story included broken scenery, broken ankles and Captain Hook losing the piece of his anatomy to which he gives his name. But that story (a coincidence in its similarity to Mischief Theatre’s production) ain’t got nothing on Peter Pan Goes Wrong.  I could talk about the atmosphere before the curtain went up&hellip;

An almost perfect tour de force of physical comedy. Well worth the journey to Islington.

A few months ago I heard a story on the podcast This American Life about a real production of Peter Pan at an American college that went disastrously wrong. The story included broken scenery, broken ankles and Captain Hook losing the piece of his anatomy to which he gives his name. But that story (a coincidence in its similarity to Mischief Theatre’s production) ain’t got nothing on Peter Pan Goes Wrong.

I could talk about the atmosphere before the curtain went up (buzzing), or the theatre’s VIP treatment of the press (well, I got a free glass of wine) but the be-all and end-all of this show was comedy, which I have to say was – there’s no other way to describe it – top notch. You’ve heard of laugh a minute? This, more accurately, was laugh roughly every four to seven seconds.

For the sake of completeness, I will set the scene: the bar beforehand was busy (some might say cramped), the house was totally full. To borrow an expression from the legendary cricket commentator Henry “Blowers” Blofeld, it was “absolutely brimmers”. Given the bench seating, we were quite literally packed in. Perhaps the crowds had been drawn in by Mischief’s reputation for high quality comedy (their show Lights, Camera, Improvise! is brilliant). Or perhaps – and I’m leaning towards this option given the twelve-strong clan in the row in front and the standing ovation at the end – the cast had called in an enthusiastic friends-and-family audience for press night.

This is not to say that the show does not deserve such a full and responsive house. From start to finish, it was wonderfully funny. The premise – that of Cornley Polytechnic Drama Society performing what turns out to be a disastrous production of Peter Pan – was carried through skilfully from the programme we were given on our way, right the way through to the curtain call.

The jokes were simple, sure, but belly-laugh goofy. Something went “wrong” at every turn; actors missed their lights and their cues, props broke, scenery collapsed and actors likewise. The effects to create the calamity were impressive from falling scenery to electronic explosions – a triumph of technical mastery.

Despite the riotous comedy, there was also the sense that they were constantly toeing the line between hilarious farce, and pretty obvious slapstick. There were some moments that definitely opted for the cheap joke, at the expense of the show as whole. One example: the pretence that Tinkerbell has to be followed around by the stage manager holding the lead to which her lit-up skirt is attached, was briefly abandoned for a dance number in Act Two. Also, the openings of each act were almost cringingly artificial and forced, rather than the more rewarding comedy arising from accidental circumstance.

That being said, the show also found some moments beyond humour, getting the audience to engage in the story of Max (the actor playing John, the crocodile, and all too briefly, Peter Pan). For this, we must mention the fantastic work of Dave Hearn whose performance was completely compelling, his reactions spot-on and never missing a beat. Also, I must give an extra round of applause and big cheer to Sophie Whittaker who ably stepped into the role of Annie (no light feat) a mere two days ago.

Mischief is a terrific young company that continue to make quite brilliant original comedy and Peter Pan Goes Wrong is no exception. The show is so funny – my stomach actually still hurts – that I can forgive its few wanderings off-course into indulgence.