Home » Features and Interviews » Breaking down the barriers – Sponsored

Breaking down the barriers – Sponsored

Author: Everything Theatre in Features and Interviews 13 December 2013 0 255 Views

The Cauldron is a series of events which aims to break down the barriers between the arts.

The arts can seem hugely tribal. Theatre people will only go to the theatre. Classical music people are only ever seen in concert halls. Folk music people haunt only folk clubs. And literary folk are only happy at stuffy book readings. Is that really true? Are people really so clannish?

No, of course, they’re not. My tastes, and those of most of my friends, span a huge range, and I’m sure we’re not alone! I might go to a serious fringe theatre drama one day, but I can go to a classical concert the next day and a pop gig the day after, and so on. That’s probably true for most people. Strangely, though, very few arts venues reflect this broad interest in their programming.

That’s why a neighbouring author and I set up a series of events called The Cauldron at our wonderful local pub, the Hemingford Arms in N1. Fortunately we are blessed here with a beautiful upstairs lounge that creates a magical atmosphere. But into this space we’ve thrown a fantastically eclectic brew of artists to see how they would interact – and the result has been genuinely inspiring.

For one event, we teamed up author Sarah Dunant, who writes best-sellers about the Borgias and their contemporaries, with a renaissance lute player. The evening became about unrequited love, which was apparently big in Renaissance Italy:

Meanwhile, a brilliant young soul/folk singer composed some music for new translations of Petrarch sonnets; a young actor brought some poems about unrequited love, and a rising star of the newfolk scene gave us a wonderful new love song about a friend who loved the wrong girl.

At others, great musicians have created atmospheric stories with writers and poets. Actors have found new ways of using words. Classical musicians have improvised with folk musicians and music theatre performers. Poets have worked with pop musicians. Composers have been inspired to write new pieces in genres and for musicians they’d never thought of working with before. Artists in one field have been thrilled to see up close the expertise of artists in another field.

But the biggest thrill, perhaps, is for the audience, who get to see a cornucopia of surprises brought by great performers who are so clearly enjoying themselves that there is continual buzz of excitement. In some ways, that’s the biggest barrier that we’ve broken down.

In most performance venues, there’s a very clear demarcation between Performers who are raised, metaphorically or literally, on high on a stage; and the Audience who watch from below. By making the performers part of the audience, everyone becomes a participant and wills the performers to do their best rather than sitting in distant judgement – and so the performances are often, quite literally, inspired.

We’ve done seven so far, with their own themes, and on Monday 16th December, we’ve got our eighth, a special Christmas event. It features the premiere, as a rehearsed reading, of parts of an acapella musical based on Nancy Mitford’s 1932 novel of Bright Young Things, Christmas Pudding. We’ve also got some early carols for lute and cello, new songs for Christmas written by top composer Lola Perrin, a new Christmas oratorio by Kelvin Thomson, a new folk-rock epic telling the Christmas story for today’s Londoners, stories, comic songs, violin and cello duets from visiting world-class musicians, carol singing, traditional games and much more.

If you’re in Islington at 7.30pm do drop in and join us. It promises to be a special night!

Tagged with: Breaking down the barriers Hemingford Arms The Cauldron 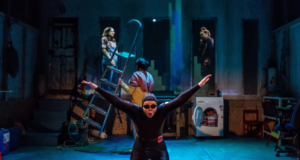 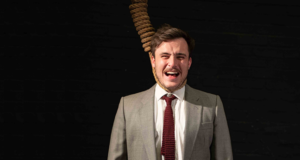