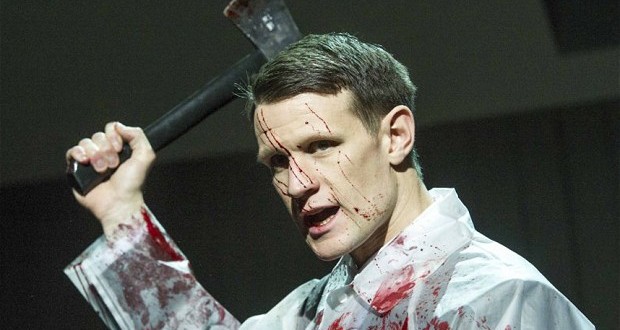 Cons: There is nothing much to discredit this show. It is pure joy.
American Psycho, Almeida Theatre – Review

Pros: Terrific music, strong performances and entertaining dance numbers. Cons: There is nothing much to discredit this show. It is pure joy. If any London theatre can do horror masterfully, it is the Almeida. Earlier this year, The Turn of the Screw had me jumping out of my seat, blaspheming and retreating to my happy place many times. I then journeyed home to leave the lights on in my house for two nights running. The set alone was enough to shatter my nerves, with realistic-looking bats shooting out of the rafters when I least expected it. For American Psycho,&hellip;

A thrilling, exciting and highly original musical which has far more depth than I remember from the film.

User Rating: 4.65 ( 1 votes)
If any London theatre can do horror masterfully, it is the Almeida. Earlier this year, The Turn of the Screw had me jumping out of my seat, blaspheming and retreating to my happy place many times. I then journeyed home to leave the lights on in my house for two nights running. The set alone was enough to shatter my nerves, with realistic-looking bats shooting out of the rafters when I least expected it. For American Psycho, no curtain separated us from the stage before the show began, so we were given permission to peer into the living room of a serial killer as we settled into our seats. The sight of a clinical, corporate, emotionless penthouse gave an ominous sense of what was about to come.

Bateman is a sunbed-worshiper, a youth-obsessed, shallow creep in a sharp designer suit. The choice of Matt Smith in this role is clever casting – not only are we used to seeing him as the most wonderfully benevolent being in the universe, we are used to seeing him as that character alone. Smith is almost unrecognisable as this dead-eyed shark of a man with multiple credit cards and no soul. It’s all terribly unsettling and most effective. I can’t imagine any other actor having quite the same impact. His characterisation is excellent and his singing voice is most impressive. As a Doctor Who fan myself, it was most exciting to see Smith play a mad man without a box for a change.

A musical version of a story such as this could have been a disaster, but honestly the music is so terrific, the supporting cast so astonishing and, of course, Smith himself so well cast, that the show is an absolute triumph. Considering I couldn’t finish the book, I didn’t like the film and I loathe most musicals, I’m genuinely shocked at this one. A blood-splattered jazz hands musical could have been very tiresome.

One of the strongest components of the show is the supporting cast – a troupe of triple threats who are extraordinary in their talents. Cassandra Compton is excellent as Bateman’s sensitive and put upon secretary and Susannah Fielding is equally brilliant as Bateman’s marriage-obsessed girlfriend.

By coincidence, this review coincides with me reading a book on Jack the Ripper by Philip Sugden, considered by some to be the truest insight into those murders. One element of the story which is common in such cases is the inherent misogyny of the murderer and, of course, women being typically smaller and physically weaker than men, making them easy prey. I was quite expecting the same thing from Patrick Bateman so I was rather surprised to see that some of his victims were men. Is it awful of me to say that I found a non-gender biased serial killer refreshing? One of the issues many people have with American Psycho is the alleged glorification of the slaughter of innocent people, but this story, like a lot of good fiction, is what you make of it. For me, it’s a story of the loneliness of superficiality, quite like the tale of Gatsby, only Bateman is the personification of corporate greed and his victims represent the innocent lives destroyed by excessive and immoral corporate profit.