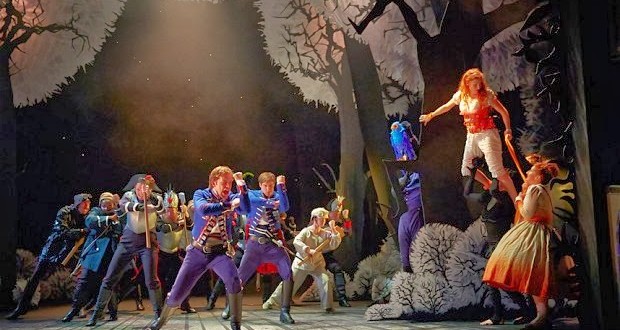 Pros: Clever and beautiful direction and stage design with an outstanding performance from the female lead.

Pros: Clever and beautiful direction and stage design with an outstanding performance from the female lead. Cons: Very fast paced, full on music which lacked beauty. The Light Princess, a new musical by the National Theatre, ticked all the boxes for me when I saw it advertised: I love the National. I love fairy-tales. I love musicals. The marketing is visually stunning. I had very high expectations. But perhaps I got a little carried away; got a bit ‘fairy-tale princess’ over-awed with the prospect of this production as, in the end, I felt quite let down.  The Light Princess&hellip;

An imaginative, visually-rich tale which is let down by the musical element.

The Light Princess, a new musical by the National Theatre, ticked all the boxes for me when I saw it advertised: I love the National. I love fairy-tales. I love musicals. The marketing is visually stunning. I had very high expectations. But perhaps I got a little carried away; got a bit ‘fairy-tale princess’ over-awed with the prospect of this production as, in the end, I felt quite let down.

The Light Princess is an adaptation of a 19th century Scottish fairy-tale about grief, rebellion and the power of love. It follows the story of two opposing kingdoms who both lose their reigning queens. The queen’s children, Althea and Digby, deal with the loss of their mothers in very different ways. Althea becomes so light and careless with her grief that she begins to float. Digby becomes so heavy-hearted that he never smiles. They become the solemn prince and the light princess. When the kingdoms go to war both are forced to face reality and rise to the challenge to protect their kingdoms but are held back by their conditions. It’s a modern fairy-tale with a strong female lead who – despite her ‘light’ fragility – is actually very strong-hearted.

The Light Princess project is four years in the making. A National Theatre collaboration with well-known singer/songwriter Tori Amos, the entire musical score and script has been devised by Amos and playwright Samuel Adamson. It has all the ingredients of a great musical production. Unfortunately the music isn’t quite up to scratch.

Naturally, as one would expect from a musical, most of the action is sung. The songs are extremely fast -paced and full on and, unfortunately, lack a little beauty and depth. There don’t seem to be any stand out songs, which is a shame, though the song in the finale is fairly good. Furthermore the pace of the music naturally impacts on the stride of the production. Alot of the dialogue is very frenetic and, at points, it is difficult to keep up. Obviously there is nothing wrong with a fast pace, at times it works, but there are very few moments of contrast for the audience. Little chance, infact, to really appreciate the beauty, potency and emotion of the story – which, as most fairy-tales do, has such great potential.

This said, the music, albeit it quite overbearing, is only one element to this production. What the piece loses from the musical component it gains back in the stage direction, characterisation, set design and storyline. It is an imaginative, visually rich tale. It’s cleverly and beautifully staged; with wonderfully illustrated animated projections and inventive use of fabrics to create various water scenes, among other things. The choreography portraying the warring kingdoms’ activities plays out in unison across the different sides of the stage throughout the story, and is very slick and effective. There is also some brilliantly endearing puppetry – infact the puppetry is probably the best element of the evening behind Rosalie Craig’s Althea.

Craig’s performance as the floating princess, Althea, is outstanding. The choreography and direction around her character’s distinctive condition of being weightless is the glory of this new play. It enables some very beautifully staged moments. Craig spends the majority of her time gliding above the other actors on wires or bobbing near the ground with the help of black-clad acrobats. Her physicality throughout the piece to give the impression that, unless weighted down, she will naturally float upwards is flawless. On top of this her characterisation is excellent. There were some other notable performances from the cast including Amy Booth-Steel playing Piper, Althea’s servant, and Nick Hendrix as Digby. There is also a fair amount of risqué humour which is well- pitched and well delivered throughout the piece.

Overall, given all the excellence in most other areas, this production really is worth seeing. It really does deserve praise and accolade for all but the musical element – which is a shame. So, genuinely without meaning to sound insincere, if you love imaginative set design and choreography but can reconcile yourself to seeing a musical where the music takes a back seat – then you should see this. It’s worth it.