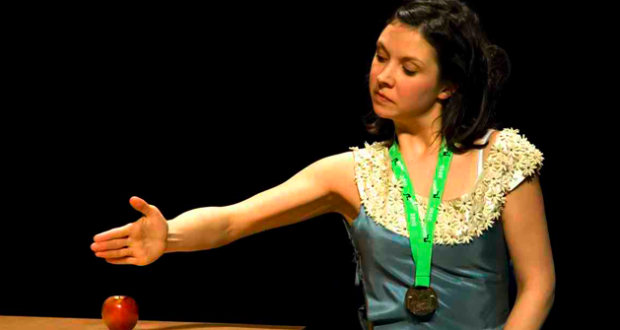 Cons: The script is a bit hard to follow at times, and sightlines at the Bush made it hard to get every detail of the performance.
Mess, The Bush Theatre – Review

Pros: Caroline Horton shines as performer and writer, equipped with a well-devised set and incredible supporting cast.  Cons: The script is a bit hard to follow at times, and sightlines at the Bush made it hard to get every detail of the performance. In her current tour of Mess, theatre-maker Caroline Horton sets out to invite us into the private and secretive experience of dealing with an eating disorder. She tells a version of her own personal experience with the disease, featuring herself as the leading character Josephine, in hopes of sparking an open conversation about the thought processes&hellip;

Horton delivers a poignant and original exploration of struggling with anorexia. An element of humor and whimsy makes the tough subject an easier, but still effective, pill to swallow.

In her current tour of Mess, theatre-maker Caroline Horton sets out to invite us into the private and secretive experience of dealing with an eating disorder. She tells a version of her own personal experience with the disease, featuring herself as the leading character Josephine, in hopes of sparking an open conversation about the thought processes behind anorexia nervosa, the effects on the people close to the sufferers, and the difficult decision to work towards rehabilitation.

Mess is not only a thoughtful meditation on illness and relationships, but is also a really extraordinary piece of theatre. Horton addressed her subject with fresh perspective and not without a much needed sense of fun. As Josephine notes in the early moments of the play, doing a play that addresses eating disorders can come with a heavy stigma, but Horton’s whimsical script does well to create a sense of humour and fun that runs alongside the play’s serious core.

Josephine, very much like Caroline herself, has set out to perform a play about anorexia. In its early moment, the play sets itself up as a play-within-a-play of sorts, explicitly letting us know that we are seeing Josephine/Caroline’s creative vision unfold. Josephine introduces her friend Boris, and soundman, Sistahl, who are played respectively by Emily Goddard and Seiriol Davies. The three of them make up the entirety of the cast.

Goddard, performs excellently as Boris, gaining her laughs as the show plays with gender roles in the actress’s performance of Josephine’s male friend, and offering a stable emotional core. She portrays Boris with sweetness and truth, offering the perspective a close friend or family member struggling to cope with their loved ones’ sickness. Horton, who writes the play from her own experience, gives an honest and delightful performance as Josephine, who is appropriately both lovable and infuriating. While Horton is clearly the driving force of the play, both as writer and lead performer, and Josephine’s personal struggle and relationship with Boris compose the play’s arc, Davies as Sistahl is without a doubt the most memorable element of the play. Sistahl’s ludicrous attitude and sound effects to match provide a much needed break from the play’s plot – a woman deteriorating into her illness.

The set is simple, a terrycloth covered loft and fluffy duvet demand attention at back left corner of the thrust-style stage, while the front right is overtaken by Sistahl’s booth and piano, giving Davie’s comic relief role the sense of a Greek chorus – he often uses music or facial expressions aimed at the audience to indicate subtext. Unfortunately columns on the Bush’s stage made it hard for me, sitting on the right wing of the stage, to see all the props and follow what was written on signs. However, it’s a touring production, so less than ideal sightlines at some venues are to be expected.

All in all, Horton’s play is really delightful, if at some moments a little confusing. Certain things move very fast, but Josephine does acknowledge the vagueness and fuzziness of details as she struggles to figure out how exactly to relate her story to us.  So that can be easily forgiven as part of Horton’s stylistic approach to the material. And her stylistic approach is generally brilliant. It’s not easy to be entertained during a play about matters such as eating disorders while retaining a sense of seriousness about the subject. Horton’s play is charming, funny, and heartfelt, but doesn’t leave the difficult issues of dealing with illness at the wayside for the sake of laughter. This makes Mess one of the rare pieces of theatre to be in perfect balance of learning experience and entertainment.

Previous: Knickers To That!, Etcetera Theatre – Review
Next: The Lady’s not for walking like an Egyptian, Ovalhouse – Review