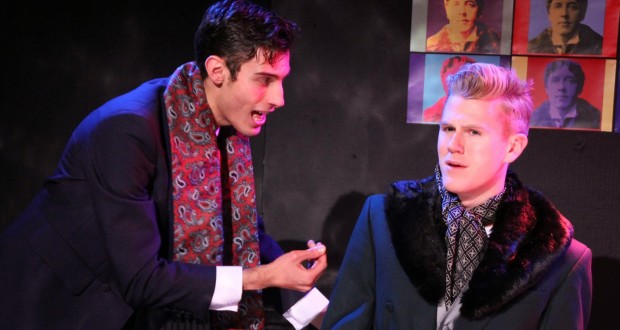 Pros: Maintains the irony, good humour and wit expected of anything to do with Oscar Wilde.

Cons: The lyrics and the music are a bit clunky and the condensed version of the script doesn’t quite capture the cleverness of the original story.
Ernest, Etcetera Theatre – Review

Pros: Maintains the irony, good humour and wit expected of anything to do with Oscar Wilde. Cons: The lyrics and the music are a bit clunky and the condensed version of the script doesn't quite capture the cleverness of the original story. The Importance of Being Earnest is one of my favourite plays. Laugh-out-loud funny, intelligent, ironic and cynical... its absurd characters and outrageousness, one might think, would lend itself perfectly to a musical format. However, the songs that were created for the musical version of Oscar Wilde's famous play did not match the brilliance, insight or intelligence of&hellip;

This is a fun idea that is perhaps limited by resource.

The Importance of Being Earnest is one of my favourite plays. Laugh-out-loud funny, intelligent, ironic and cynical… its absurd characters and outrageousness, one might think, would lend itself perfectly to a musical format.

However, the songs that were created for the musical version of Oscar Wilde’s famous play did not match the brilliance, insight or intelligence of the original script. Instead of adding to the ironic and mocking nature of the piece, the music acted instead as an intrusion on the original words, than adding to the satire.

The play, originally set in the late nineteenth century, follows the young well-to-do Jack Worthing (Samuel Harris). He uses his alter ego, Ernest, to escape into the country and avoid the confines and responsibilities of being a guardian to his eighteen year-old charge, Cecily (Ella Duncan). Visiting his friend Algernon (Lincord Hydes) in the country, Ernest (Jack) declares his intentions to propose to Algernon’s cousin Gwendolyn (Cassandra Coster). While his feelings are reciprocated by his intended, they are rejected by Gwendolyn’s mother (Amanda Bailey) on the basis that Ernest was found in a hand bag without any lineage. His confidence in the match is further deterred by Gwendolyn’s assertion that she could only marry a man named Ernest.

Meanwhile, Algernon decides to stir the pot by pursuing Ernest’s charge Cecily. Seemingly harmless enough, except for the fact that he takes for himself the identity of Jack Worthing’s alter ego, his evil brother Ernest, a man who Jack’s city society only know in myth and with whom Cecily has had a growing obsession.

The original play mocks the hypocrisies of high society in 1895 (when it was written) with line after biting line. While this version is set in contemporary London, ‘Jack embarks on a journey through Wilde’s time, a world where people adopt different identities, are perceived by others as they would like to be perceived and create their own worlds and realities.’ This device, according to the programme note, is meant to allude to internet games in which players can represent ideal versions of themselves as an online avatar.

This frame for this adaptation of the piece isn’t really evident without reference to the programme notes. It is only referenced through the use of modern props and a mixture of Victorian and modern costume and vocabulary that don’t fit together for this particular work. The finishing freeze of the production suggests that the entire play happened in a modern-dress-Jack’s mind, but this does not particularly add any depth to the piece.

The production elements of the production, on the other hand, were quite impressive. To put a musical on in a small space without overwhelming the audience or the setting is no mean feat. The minimal staging allowed Oscar Wilde’s brilliant words to make their mark and the magnificent Victorian costumes to speak for themselves. However, the choreography during the musical numbers, although perhaps attempting to add a certain frivolity to the ridiculousness of the story, were quite weak.

The delightfully pompous and posh characters were presented with vivacity and truth and without caricature, a danger when portraying satire. Stand-out performances amongst the cast include Linford Hydes (as the perfect Victorian dandy Algernon) and Samuel Harris, whose skill with music and excellent singing voice appeased even the silliest of songs and lyrics. The best part of the production was perhaps watching these two talents working together on the stage.

While this show was fun, light-hearted entertainment, I did find that it glided over the scathing undertones of the original work. These are what make the original play so funny and without them, the show falls into chaotic silliness that tends to miss the point.