Cons: The production in the original Spanish limits the audience pool significantly.

Our verdict: Spain’s past and history came alive in the little theatre of Barons Court. A powerful and symbolic production filled with surprises. 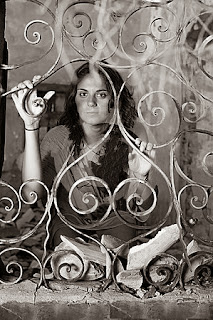 The House of Bernarda Alba is Spain’s most famous dramatist Federico García Lorca’s last tragedy. Written in the midst of the Civil War that would ultimately cost him his life, the play is set in a very small town lost in the deepness of traditional Spain, and built around the religious and social pressure people of the time were subjected to. Tradition was the iron chain everyone was tied with as shown through the characters in the House of Bernarda Alba.

The play opens with Bernarda, played by Belen Díaz, setting a rigorous mourning over her household due to the death of her second husband, father to four of her five daughters. Appearances are truth and above all, the Alba name must be associated to the standards of a ‘good’ family even when grieving. Angustias (the eldest), Magdalena, Amelia, Martirio and Adela wear black robes and veils and are constrained to the house and grounds for a period of eight years. There is an immediate contrast between the Spain that was forced on the people by means of fear of destitution (presented by Bernarda’s character) and the reality of the times.

In the middle of this bereavement, Angustias is betrothed to Pepe ‘El Romano’, a handsome villager, much to the excitement of her sisters, providing a distraction, and the dismay of Adela – the youngest – who hasfeelings for him. Pepe is the omnipresent character acting as the catalyst for the story to kick into its climax.

Some additional roles (Poncia, a maid played by Yaiza Figueroa and Bernarda’s mother, played by Paula Valluerca) complete the mix for a tangled web of jealousy and secrets that builds through the clandestine passions Pepe creates.

The play develops around the rooms of the house and space outside the traditional Spanish farm, staged in the small and cozy area of Barons Court Theatre, the seating arranged closely around the three sides of the square-shaped space.

Without Bernarda’s character, the story would simply be an exploration of the complicated relationships between sisters when a mutual love interest comes along. It’s a beautiful and complicated character and Belen Diaz was certainly up to the challenge – she gave a strong, most elegant performance.