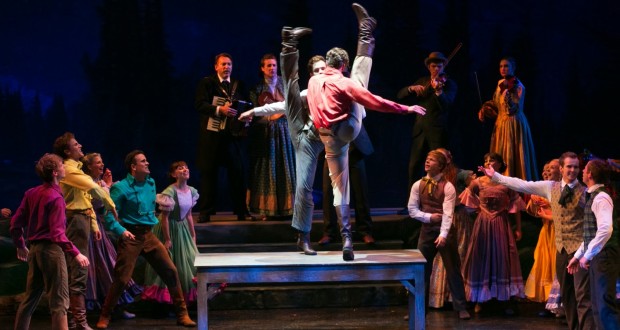 Cons: The sound needed a little re-adjustment: sometimes it was too little, and other times too much.
Seven Brides for Seven Brothers, New Wimbledon Theatre – Review

Pros: The famous barn raising sequence and Helena Blackman's wonderful performance as Milly.  Cons: The sound needed a little re-adjustment: sometimes it was too little, and other times too much. An adaptation of the 1954 Academy Award-winning musical Seven Brides for Seven Brothers is embarking on a national tour around the UK; a very exciting prospect for fans of Hollywood's golden age of singing reels. The original script tells the story of the Pontipee brothers, the seven sons of Oregon trail settlers living in a secluded region of the mountains. When Adam Pontipee - the eldest - leaves for&hellip;

All-out family fun! Keeps to the standard of the original, but provides the added benefit of live performances.

An adaptation of the 1954 Academy Award-winning musical Seven Brides for Seven Brothers is embarking on a national tour around the UK; a very exciting prospect for fans of Hollywood’s golden age of singing reels. The original script tells the story of the Pontipee brothers, the seven sons of Oregon trail settlers living in a secluded region of the mountains. When Adam Pontipee – the eldest – leaves for the nearest town to stock on some goods (and a wife), we meet Milly, an orphan living under the care of the local preacher. Milly is just perfect for Adam: ‘pretty and trim but kinda slim …and sassy as can be!’ When she decides to marry him and return with him to the farm, little does she know of the nest of wild beasts she is walking in to. Fortunately her strong and tenacious character prevails and she finds her place among the raggedy Pontipees. However, her arrival this raises a question for the younger brothers: now that Adam has a wife, what about the rest of them? And they come up with the best solution possible taken from one of Milly’s books: to kidnap seven town girls.

The film and score is a beacon of pride for 1950s musicals; it’s up there with Calamity Jane. Howard Keel and Jane Powel as the screen’s Mr and Mrs Pontipee are a hard act to follow, setting a high standard for any new production of this play. So how does this one fare?

The play was colourful, vibrant and a pure joy to watch. The cast oozed energy as they danced, sang and kidnapped their way to the radiant ending. Sam Attwater as Adam Pontipee delivers the strong, impulsive but rather sensitive profile with his vocals and acting. Meanwhile Helena Blackman is magnificent as the spunky, stubborn Milly. Ross Meagrow, Joe Murphy, Jack Evans, Pip Hersee, Sam Stones and Jack Greaves as the remaining Pontipee brothers dance and sing their hearts out on stage and their ‘blushing’ brides do not disappoint either; they are all fantastic.

There are two main reasons why you should not miss this production. The first is the barn raising scene, in which the brothers first encounter the seven town girls. It’s a cocktail of colour and energy, just as good as the original with the added benefit of being live. The acting, singing and choreography really make your skin tingle. It was one of the things I was itching to see, and did not disappoint one bit. The second is watching Helena Blackman as Milly. Her presence and vocals are simply striking, sometimes stealing the show altogether.

Seven Brides for Seven Brothers is an all-out family experience and something that musical lovers and anyone looking for some light-hearted fun should watch. The chemistry between the cast really works, and with a live orchestra and sparkling settings everything comes together wonderfully.