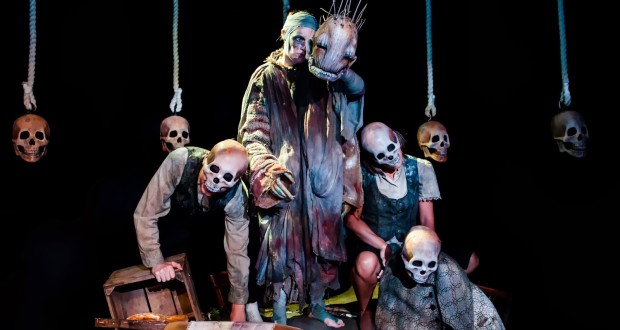 Cons: I had a hard time finding any. I would understand however if one might tire of the somewhat cliché characters and storyline.
HAG, Soho Theatre – Review

Pros: Haunting story that echoes traditional Slavic folk tales. Atmospheric and spectral staging. Cons: I had a hard time finding any. I would understand however if one might tire of the somewhat cliché characters and storyline. Remember that feeling of your mum tucking the sheets around you in bed, dimming the lights and telling you a story that made you quiver with a delicious sense of anticipation and horror? You laughing squeakily, fearfully, trying to sense whether she is being serious or not? HAG whisks grown-ups off to a fairy tale world that is inhabited by ghosts, evil stepmothers&hellip;

A brilliant, gory fairy tale that strikes just the right balance between being touching, terrifying, and comic.

User Rating: Be the first one !
Remember that feeling of your mum tucking the sheets around you in bed, dimming the lights and telling you a story that made you quiver with a delicious sense of anticipation and horror? You laughing squeakily, fearfully, trying to sense whether she is being serious or not?

HAG whisks grown-ups off to a fairy tale world that is inhabited by ghosts, evil stepmothers and cruel stepsisters, an innocent young heroine, and Baba Yaga; a fearsome character borrowed from old Slavic folk tales. Baba is a hunchbacked figure with a savage appetite for human beings, children making particularly tender and tasty snacks. In The Wrong Crowd’s production, she is brought to life in a brilliant performance that is moving, scary, and absolutely hilarious, with just the right amount of comic breaks from a story that had me clench my fists and wipe my eyes. A clever combination of acting, puppetry and music, you should go and see this show if you want to escape from the daily grind into a world like the one we used to know so well as children.

The story itself is fairly simple. Lisa, played by Sarah Hoare, loses her mother, who is subsequently replaced by a cunning and sexually ravenous stepmother, played by an outstanding Theone Rashleigh. Tormented by this woman and her two cruel stepsisters, Cindarella-like Lisa finds herself in the dark forest, alone but for a puppet that her mother gave Lisa on her deathbed, who comes alive and helps Lisa to face Baba Yaga and grow up at the same time. Lisa has to complete three tasks with the threat of becoming Baba’s next afternoon snack hanging over her. One task takes her to the underworld where she finds her mother and has to learn to let go. Here, she meets a very English version – that is, kindly and proper- of Charon, played by Tom McCall, the ferryman who carries the souls of the dead to their final resting place in ancient Greek mythology.

While the story is not new, this production managed to retain the suspense very well. Researched and developed in association with Bristol Old Vic’s Ferment and the Southbank Centre, it is clearly a well worked out piece. The staging, which depicts Baba’s foul, dark lair surrounded by eerie skulls and covered in mouldy autumn leaves, is further enhanced by cleverly ethereal lighting design. Rachael Canning’s costumes are equally superb. Baba’s face, half mask, half puppet, made me think of Harry Potter’s Voldemort; a skull, a porcupine and an old woman with a mischievous, if a little sad, glint in her eyes all at the same time. Laura Cairns plays this rasping, heaving, cantankerous figure, who doubles up as a brilliantly comic storyteller, with a ferocious humour that allows for Baba’s more complex characteristics to shine through. In the end, I felt almost sorry for this lonely, dirty and grumpy old hag warming herself by her tiny fire, with only the ghosts of her former murders for company.

I also really liked the trio that made up the evil stepmother, Little A and Little B, the stepsisters with the suspiciously American accents. It was obvious from their gleeful performances that actors Tom McCall and Theone Rashleigh were having a ton of fun with these characters. All in all, chapeau to the cast and the creative team for a hugely entertaining and fun evening of magic, music and mystery.