Author: Everything Theatre in Off West End, Reviews 6 September 2013 0 840 Views

Directed by Owen Horsley
★★★
Pros: Interesting staging and style, with engaging character portrayal and genuinely eye-opening moments.
Cons: A sense that it was a bit rushed and the cast a bit inexperienced in dealing with this kind of piece.
Our Verdict: A visually arresting and memorable production that’s a great way into this classic play.
Ah Malfi: sun, sea, sand. Crazy boat trips. Shaving-foamed bananas. Drunk kids lying blissfully in their own vomit. I met my current girlfriend Kerryjo-Rocheryl out there: our eyes met across a burning shot bar. Sorry, not Malfi – Malia. The characters in this Eyestrings Theatre Company production were of a seemingly more distinguished ilk than those found frequenting the midnight tattoo parlours of Crete. Surely, as a result, they’d be a lot better behaved, right?
I’m clearly not very au fait with Elizabethan theatre. I’d heard of The Duchess of Malfi before, but had never seen it, nor really knew anything about it (except that it featured a Duchess?). The play begins by introducing three siblings: Ferdinand, a cut-throat money-grabbing nobleman, The Cardinal, a… Cardinal, and the Duchess of Malfi (phew, there she is).
Recently widowed, the Duchess is clearly hankering after a new hunk, but her creepy brother Ferdinand has other ideas: he hires a manservant, Bosola, to spy on her and make sure she stays out of love trouble – if only John Webster knew that he’d pretty much created the prototype for BBC3’s hit show, Sun, Sex and Suspicious Parents…
With the tasty setup in place, all hell was let loose – and it wasn’t even allowed back indoors for its night time biscuit. Plot twists, psychologically complex characters and chillingly dramatic moments snaked their way across Southwark Playhouse’s stark, in-the-round, stage. Chairs were the prop of choice, used as (funnily enough) seating implements, but also as deafening percussion: thrown down by the characters during their frequent anger fits. Another intriguing device was the use of a fifties-style microphone that echoed eerily around the theatre and transformed certain speeches into evocative voiceovers. It was as if JFK had taken over the tannoy at Tesco’s.
As much as the set was stylish and alluring in its simplicity, I felt that this sparseness and the frenetic directions of the cast combined to add a little bit of confusion to proceedings, especially early on. Clearly the play was abridged, and the decision to keep it to an hour and forty was a wise one. It really zipped by even without an interval and, with the exception of a couple of lulls, was generally very exciting and engaging.
But as a result, in cricketing terms, it felt more like a 20/20 game than a Test match. That is, of course, the compromise for shortening such an epic piece, so no major complaints. It’s just that with the unfamiliar language (I tend not to use ‘prithee’ too often in everyday life) and the complexity of the story, it would have been nice to have had a few more “scene posts” (like sign posts but… you get the idea) to allow us time to collect our thoughts. Basically I’m a bit slow and didn’t always know what was going on.
In general the acting was pretty good, although you could sense a bit of inexperience amongst the young cast, especially in the delivery of the cryptic Elizabethan text. But the characters were all very well portrayed – props in particular to Charlotte Powell who played two roles admirably: Julia, the saucy strumpet (their words), and Cariola, the Duchess’ loyal waiting-woman.
And so, prithee, watch this play. It really is a very accomplished production that will leave you thoroughly satisfied. The smart fifties-era setting made it more accessible to those who, like me, are new to the work. The shortcomings are really only in the abridged nature and the fact, I suppose, that you have to be in the right mood for a play like this: it’s not exactly family fun, you sometimes have to take a moment to work out what someone has said, and there’s quite a bit of sex and violence. So, a bit like Malia then.
Please feel free to leave your thoughts and opinions in the comments section below!
The Duchess of Malfi runs at Southwark Playhouse until 7th September 2013
Box Office: 020 7407 0234 or book online at: http://southwarkplayhouse.co.uk/
Charlotte Powell Eyestrings Theatre John Webster Owen Horsley Southwark Playhouse The Duchess of Malfi 2013-09-06
+Everything Theatre

Previous: The Taming of the Shrew, The Rose Theatre, Bankside – Review
Next: The Comedy of Errors, The Space – Review 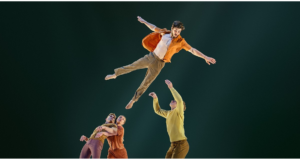