Author: Everything Theatre in Off West End, Reviews 6 September 2013 0 576 Views

Cons: Would have been nice to have a longer show!

Our Verdict: A one-act play that packs an emotional punch.

Doonreagan takes place a few years after the death of Sylvia Plath – the famous American poet who committed suicide in the 60’s. Her husband, fellow poet Ted Hughes, has moved his children and lover, Assia Wevill, to the eponymous Doonreagan cottage to escape public scrutiny. Ann Henning Jocelyn – the author of this play and the present owner of Doonreagan – was privy to letters left behind by Hughes, and had access to his and Wevill’s contacts. Using these resources, she has succeeded in writing nuanced, complex characters, so that despite their chequered history, they remain relatable and interesting.

When we first meet Hughes (played by Daniel Simpson) we find a relatively calm and quiet man, very different from the man Plath described as having “a voice like the thunder of God.” Hughes delights in watching his children at play and seems to have found serenity. We later meet his lover Wevill (played by Flora Montgomery) – his common law wife in all but name. It is soon apparent that Wevill takes a pragmatic stance to life and that at this juncture, she is the most self-assured of the two of them. At various points in the play, the noise of Shura (Wevill’s and Hughes’ child) crying breaks the serenity of both characters, as if it is an omen of great portent.

As the play progresses, Wevill, who is used to living in metropolitan environs, begins to relax and enjoy the quiet rural existence. She pursues her painting, dabbles in writing poetry, and begins to understand why Hughes decided to uproot the family to this idyllic part of Ireland. Hughes, by contrast, finds his powers of creativity are heightened and that as producing some of his best ever work, he too begins to feel whole. However, the news surrounding the fate of Doonreagan disrupts their tranquillity and if there was any doubt before, it becomes very apparent that the ghost of Plath has truly not been laid to rest.

As Hughes began an affair with Wevill in the months prior to Sylvia Plath’s death, she was arguably a catalyst for Plath’s final bout of depression. However, to hear her tell her side of the story, you can understand where she is coming from, even if you don’t entirely sympathize. Montgomery does a fine job of bringing her to life and imparting her with warmth, humour and energy – attractive traits for someone living with a widower.

Hughes, as written by Jocelyn, does have some positive qualities. He has a good relationship with his parents and understands his father’s troubled soul, the legacy of witnessing atrocities during the First World War. Hughes also cares for the children he fathered with Plath and wants them to have daily access to nature, something he cherished from a part of his childhood. Jocelyn, however, doesn’t shy away from the quirky or less savoury aspects of his personality.

At one point, Hughes relates how astrology explains his own sombre disposition and that he’s ‘doomed’ to live a life full of emotional strife. Wevill is sceptical about this, but the scene did remind me of one of Julius Caesar’s famous quotes, something Jocelyn may have been alluding to indirectly: “The fault lies not with the stars… but with ourselves.” The real clincher though is Hughes’ candid perception of his relationship with Wevill and their daughter Shura. As many of you know, another tragedy awaits in this story. I knew what was coming, but even I was reeling by the degree of Hughes’ brutal honesty (at least the way he was depicted in the play) and the lack of thought to what the consequences to his candour would be.

Suffice to say, the ramifications are of Medean proportions and a reminder that even the strongest of people can succumb to extreme behaviour, if they feel they have no other way to be heard. It is also a reminder that some things aren’t inevitable, but could happen again if lessons aren’t learned. Doonreagan is a short play, but it certainly packs a lot of emotional punch into its single act. It offers insight into an obscure part of Ted Hughes’ life, and the tragic events surrounding the relationship with his first two wives. This is the kind of play that leaves you wanting more.

Previous: The Picture of Dorian Gray, Greenwich (Secret Location) – Review
Next: The Taming of the Shrew, The Rose Theatre, Bankside – Review 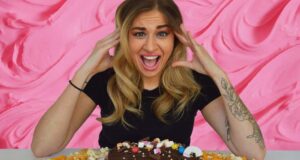