Pros: A highly amusing play with a standout performance by Anthony Curran.

Cons: The big reveal at the end felt a little rushed.

Our Verdict: The play could do with some fine polishing, but on the whole, the writing and acting was top notch. 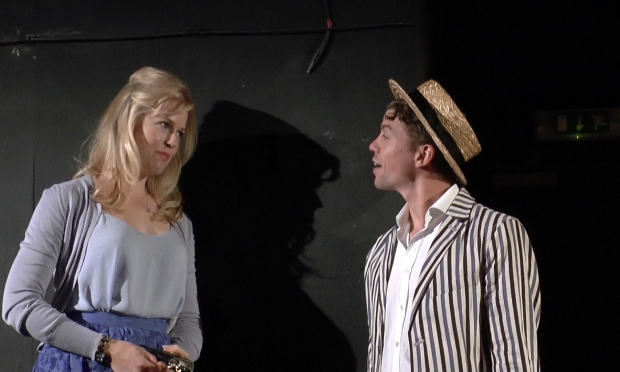 How does the saying go? “What goes on in Brighton, stays in Brighton.” Well, not for Gerald Angel, Professor of Moral Philosophy. Gerald is a thoroughly decent chap, who has never stepped out of line, or cheated on his wife. Not until Brighton anyway. After giving a lecture to hoards of enthusiastic students, he finds himself waking up in his hotel room, with a young blonde haired beauty lying next to him, having done the dirty. Or so he thinks! This is the basis of a jolly farce, written by Fauzia Rahman and directed by Chris Hislop.

The running time is just under one hour, so there is a lot to cram in for a farce. As you would expect, the events which follow are exaggerated and most improbable situations arise, but this is the appeal for a lot of people who come to see such a play. Poor Gerald can not deal with the guilt, because he is a deeply moral man and tells his wife of thirty years, Molly, what he has done. Hereinafter, events spiral out of control with the appearance of his son Henry and a blonde-haired female friend. Also, deeply involved is Gerald’s cad of a neighbour, Tom, but in more ways than one!

All the action takes place in the courtyard garden of Gerald’s country house. There is the usual comings and goings, missed opportunities and confusion, but this all adds up to an enjoyable hour at the theatre. It is not the funniest show in the world, but the play manages to keep a smile on your face for the whole of the show. The stand out performance by far, is by Anthony Curran as the bumbling, dishevelled Professor.

The only criticism of the play is that it felt quite rushed towards the end. Perhaps another 15 minutes or so added to the run time would help, without compromising the big reveal at the end, the hallmark of a good farce. It was a very good attempt at a farce and you have the feeling this play can only go from strength to strength, with just a little polishing.

The Philosopher’s Tale has finished its run at The Tristan Bates Theatre. For more information visit: www.camdenfringe.com